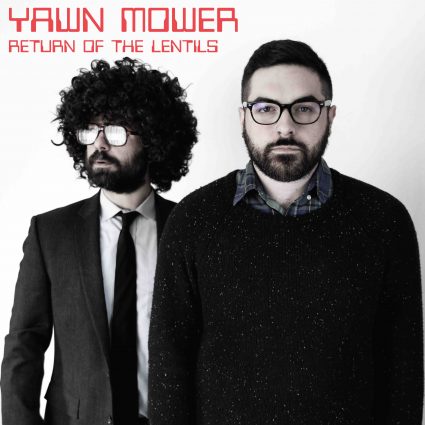 Yawn Mower - Return Of The Lentils

Good things come to those who wait, or so says a saying I saw on a South of the Border billboard once. Three years ago, Yawn Mower descended upon Simple Sounds Studios in Little Silver, NJ with Andy Bova to record two new songs and a cover. Synths were noodled with. Speaker wires fried. Drums recorded. Then life got busy for everyone in one way or another.

Years went by and “Hey, are we ever going to finish those songs?” became almost as hot of a Yawn Mower topic as “Is the Convenience Store video ever going to come out?”. Recording duties were resumed at eightsixteen studios in Toms River, NJ with Pat Noon. Bass guitars were fuzzed. Maracas were clanked. Vocals were recorded while lying on a guest bed in a basement. Mike didn’t even take his coat off.

Guest spots were obtained from people we admire. Rachel Hock (Laddy Cannon, Out Like Lambs) sang vocals for “Earworm II: The Sequel” in her laundry room. Dey Bishop (Trapbang) laid down bars for “Ghostriding The Ark” despite a bout with Covid-19. Mastering was completed once again at Azimuth Mastering in West Trenton, NJ. Nick Cucci took the cover photo. Biff dyed his hair pink.

In the end, Yawn Mower presents one of its most densely textured releases to date for Mint 400 Records. “Return of the Lentils” features more than just baritone guitar and drums. In fact, there isn’t one baritone guitar on the whole EP. Instead, your ears will be treated to synths, shakers, violins, vocals, bass guitars and bass drums. It’s all here and won’t take more than 12 minutes of your time.