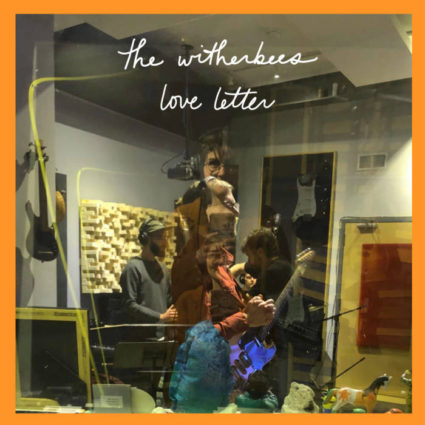 “The local group, led by Mike Lorenz and Jacqui Armbruster, formed in 2018 and established a unique sound that blends jazz, blues, folk and roots influences.” – The Key/WXPN

“The tune sounds like a dewy morning at sunrise tinged with heartbreak, but nonetheless fresh and full of possibility. Smooth and ethereal vocals by co-leader and violinist, Jacqui Armbruster, soar above a swirling cascade of blissful instrumentation. The Witherbees encapsulate morning’s reflective vulnerabilities throughout the tune, with metaphors and double entendres.” – Impose Magazine

You won’t find a dictionary entry for the word Witherbees, though having one might help predict the musical directions of this Lehigh Valley-based quartet. And that mystery is part of their allure. It’s about listening to and enjoying them for yourself, while taking in the cozy sonorous experience, either live or recorded. Discovering and discerning traces of their musical influences, defined genres and an amalgam of styles, just makes them sound like, well, The Witherbees.

Guitarist, composer and arranger Mike Lorenz co-founded The Witherbees in 2018 with Jacqui Armbruster, singer, writer and violist around a sympatico vision to synthesize modern and traditional styles they’ve heard in their heads and played together. With their rhythm section, bassist Justin Sekelewski and drummer Kyle Andrews, co-leaders Lorenz and Armbruster are exploring and crafting their own homemade recipes that blend jazz, blues, folk and roots music.

Their new album (their second), Love Letter, due for release June 4th, 2021, inspires keen introspection, emotional response and the occasional touch of cerebral humor. On this 10-song set, you’ll hear traces of influences that include Sarah Vaughan, Bill Frisell, The Bad Plus, Paul Simon, the Beach Boys, Norah Jones, Wilco and Sam Amidon. Featuring two covers and eight originals, the songs can soothe, surprise, enchant and perplex, as moody, feathery vocals and tamed, slippery or tangled guitar riffs cast their often-mysterious spells. It all fits together so pleasantly.

Still in its nascent stage, this band’s musical journey and intentions are neither clearly mapped nor closely scripted yet, and that’s the fun of it. On Love Letter, the band evokes the comfort of the familiar with a nod to past as they plumb current musical depths. You can sense the adventure of this uber-talented foursome (with guests including trumpet/electronic wind player John Swana and Tom Spiker, who plays with Bhakiti Kumalo) as they blaze their path to becoming The Witherbees. And they beckon us to join them for this memorable musical trip.