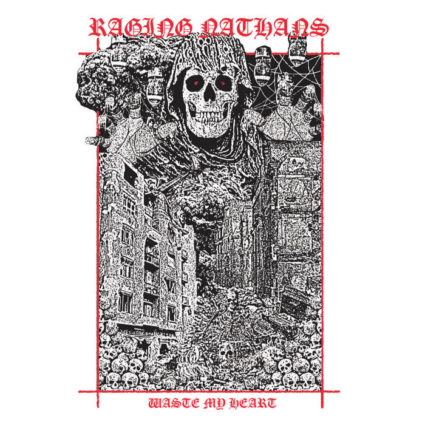 The Raging Nathans - Waste My Heart

“The first single is the album-opening title track, which is a fine example of this band’s ability to make raw, scrappy, driving pop punk. If you miss classic Lookout! Records, Dude Ranch-era blink-182, and other stuff in that realm, you’ll like this instantly-satisfying new song.” –BrooklynVegan

“The Raging Nathans hail from Ohio and they kick out mid-west style punk that draws from both The Lawrence Arms and Ramones. That is to say, they like to smash it up, but they have feelings, too.” –Punk News

“They are prolific, unapologetic, and Waste My Heart cements their legacy as one of the world’s last great punk bands who have something important to say and play all-out on their songs.” –Big Takeover

The Raging Nathans are a punk rock band from Dayton, OH started in 2009. They are releasing their fourth LP on Rad Girlfriend Records called Waste My Heart, recorded by Luke McNeil (The Copyrights, Hospital Job) and mastered by Stephen Egerton (All, Descendents). While following in the footsteps of their predecessors, the Nathans pay homage to early Lookout, Epitaph, and Fat Wreck bands at the same time blazing their own path and forging their own unique sound, always putting the punk before the pop.

The band provides smart, brutally honest, and sometimes-uncomfortable lyrical themes paired with unmistakably catchy vocal melodies and harmonies. Known for energetic and often funny live shows, the Nathans feel just as at home in the basement with 10 close friends or on stage at Rebellion Fest in front of a thousand strangers. The songs are fast and emotional and touch on a range of familiar and relatable topics. The Raging Nathans have managed to create inspired music that peak the listeners interest, evoke thoughts and emotion and brings a fresh sound to punk rock without sacrificing their DIY ethos or kissing anyone’s ass to get on tours or shows. Everything that they have achieved has been through hard work and perseverance through touring. Happy to earn their keep, their credentials speak for themselves. All you have to do is look at their tour history and their prolific discography.

The Raging Nathans are not for everyone. They are truly a punk band’s punk band. All of the attitude, none of the ego.