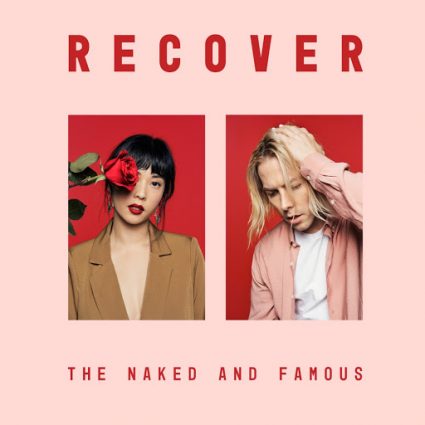 The Naked and Famous - Recover

“A buoyant and deeply felt album that finds the band continuing to hone their shimmering, synth-based sound.” – AllMusic (4/5)

“In total, Recover is a collection of songs that propel, energize and push the listener toward a better place, which is no small feat in today’s changing, often chaotic reality.” – American Songwriter

For over a decade, The Naked and Famous have delivered a boldly nuanced breed of pop that’s both effervescent and imaginative—a direct reflection of the sheer resilience at the heart of their collaboration. Founded in their hometown Auckland, New Zealand, the critically lauded act immigrated to the U.S. in 2012 after non-stop touring across the globe, then experienced major upheaval as their lineup shifted from a five-piece to a duo. Creatively re-energized and more fearless than ever, vocalist Alisa Xayalith and guitarist Thom Powers are now embarking on their most musically adventurous era yet with their new album Recover.

Originally from Auckland, The Naked and Famous formed soon after Xayalith (the daughter of Laotian refugees) crossed paths with Powers while the two were attending music college. The band put out the EPs This Machine and No Light in 2008, then made their full-length debut with Passive Me • Aggressive You—a 2010 release featuring their platinum-selling breakthrough hit “Young Blood.” As the album climbed the Billboard 200 chart and earned countless accolades (including seven prizes at the New Zealand Music Awards), they toured across the globe and finally landed in L.A., living together in Laurel Canyon. Arriving on New Year’s Day in 2013, The Naked and Famous’ sophomore album In Rolling Waves cracked the top 50 on the Billboard 200, boosted by hit singles like “Hearts Like Ours.” Not long after Powers and Xayalith’s breakup as a couple, the band documented the emotional fallout on Simple Forms, often recognized as their most complex and compelling work to date.

“Lyrically and sonically, Recover is our most optimistic body of work so far,” says Xayalith. “There’s hope and romance in every single track, and it’s really exciting to imagine what the energy exchange will be like when we play these songs live.” Powers adds: “We feel incredibly lucky to still be creating music together. It’s a big personal achievement, and this whole album is a kind of ode to our story.”

Although it took a moment for Xayalith and Powers to bounce back from the departure of their former bandmates, the duo found themselves reinvigorated upon joining forces with collaborators like Luna Shadows (a producer/multi-instrumentalist who’s previously played keys for The Naked and Famous), and Simon Oscroft (a childhood friend of Powers, who’s produced for artists like The Aces). Working out of Xayalith’s Silver Lake home, complete with a grand piano left behind by the former owner, the musicians converted that space into a studio and wrote most of the album there.

One of the most sublime moments on Recover, “Come As You Are” finds The Naked and Famous transforming an intensely personal lyric into something far more universal. “It started out as a song about how everyone comes into a new relationship with history and baggage, and how we shouldn’t let that stop us from making a connection,” says Xayalith. “But ultimately it’s about accepting people for who they really are, and recognizing that everyone deserves love.” Centered on Xayalith’s sweetly ethereal vocal work (sample lyric: “Embrace it, your somebody’s favorite”), the song essentially unfolds as a powerful anthem of inclusivity. “We want our fans to know how important inclusivity is to us,” says Powers. “Whether you’re in the LGBTQ community or an immigrant or in any other marginalized group, this band is a safe space for you.”