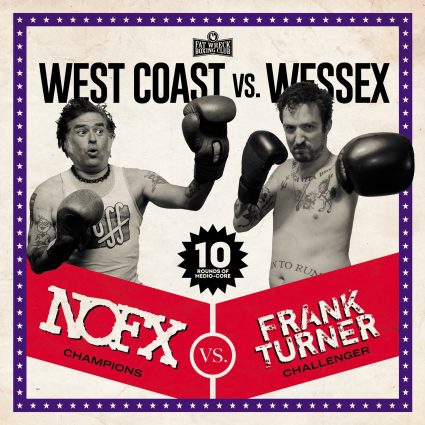 Just how often does the leader of one of your favourite bands ask you to do a split album? One where his band covers your songs? It’s the situation Frank Turner found himself in last year, when Fat Mike of NOFX asked if he wanted to do a split covers album. “And I sh*t the bed and said, ‘F*cking of course I do! That sounds incredible,” Turner recalls.

‘West Coast Vs. Wessex’ does sound incredible: NOFX filtering five of Turner’s songs through their singular sensibility, with Turner doing the same on five NOFX songs. But these aren’t simply double-time versions of Turner’s folk-punk tunes or slow, acoustic re-workings of NOFX’s iconic SoCal punk anthems. Both NOFX and Turner took time to play with the possibilities each other’s music presented.

“I listened to all his records, and I picked the ones that I thought I could make more interesting,” notes Fat Mike. “What I did is change a lot of chords. Frank, he beats me in the singing department. So I can’t sing better than he can, but I can maybe throw in a melody here or there or chord that he hadn’t thought of.”

Turner took a similar approach. “I didn’t want to just do straight covers of anything. I wanted to try and pick songs where I felt like me and my band could bring something different to the table,” he says. “But it did strike me that it would be cool to demonstrate to the casual NOFX fan, who doesn’t know who I am, that I am actually a fan. I didn’t just go to Spotify and pick the five most-listened-to songs.” For the record, only one of his choices appears on Spotify’s top five for NOFX: ‘Bob’, which Turner here transforms into a wistful country song. He pulled from deeper album tracks for his other covers: a punk-ed up ‘Scavenger Type’, a barroom singalong ‘Perfect Government’, the post-hardcore ‘Eat the Meek’, and a spare, haunting ‘Falling in Love’.

“Everything he picked was from the ’90s, so I took that as it’s okay to mostly do his early stuff too,” says Fat Mike, who channeled ‘90s NOFX for their interpretations. “People who hear it, they all say it sounds like old NOFX.” The band’s climactic take on ‘Substitute’ could’ve fit on ‘Punk in Drublic’, whilst ‘Worse Things Happen at Sea’ simmers with an ominous portent. The jaunty ‘Thatcher F*cked the Kids’ sounds like a companion to NOFX’s ‘Philthy Phil Philanthropist’. ‘The Ballad of Me and My Friends’ – lilting and bittersweet in Turner’s original – goes balls-out here. “Glory Hallelujah” sounds like a lost track from Fat Mike’s Broadway musical, ‘Home Street Home’.

Turner and his band, The Sleeping Souls, recorded their songs between their rehearsal space and during tour commitments, with Frank tracking his vocals from his bunk on the bus. NOFX recorded at Fat Mike’s Six Floggs studio, with production by the D-Composers (Fat Mike, Johnny Carey, BAZ Bastien, Yotam Ben Horin).

“It’s difficult to describe quite how it feels to hear back a song that you wrote played by NOFX, one of your favourite bands, in a style that is unmistakably theirs,” Turner says. “It tends to make me just laugh in a really elated kind of way. It’s just like, ‘Holy sh*t, this is ‘Substitute’ done by NOFX! This is f*cking insane!’” Fat Mike was similarly psyched. “When Frank picked ‘Falling in Love,’ I was so f*cking stoked,” Mike says. “Then I heard it, and I go, ‘Holy sh*t, he just kicked our ass.’ I was pleased with all of them. I thought he did a really good job – and not such a good job that we couldn’t beat him on a few songs.”

But there are no losers on West Coast Vs. Wessex. The Frank Turner–Fat Mike Mutual Admiration Society has produced 10 hooky re-imaginings of each others’ music. The novelty may pique listeners’ curiosity, but the songs will keep them coming back.