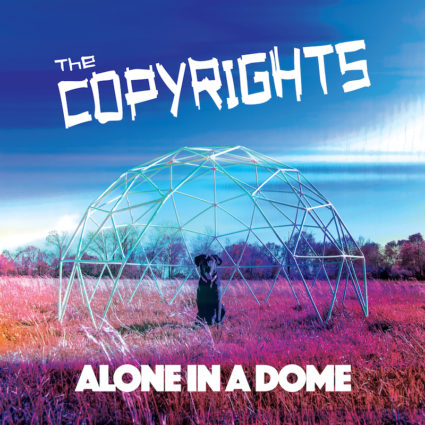 The Copyrights - Alone in a Dome

The Copyrights hail from a small college town in downstate Illinois called Carbondale.  They formed in 2002, and quickly were embraced by the pop-punk community for their fun lyrics, big hooks, and infectious choruses.

A year later, in 2003, they released their first album, We Didn’t Come Here to Die, which was produced by Mass Giorgini. Next up, in 2006, they released Mutiny Pop, and in 2007, Make Sound. Followed by 2008’s, Learn the Hard Way. Finally, The Copyrights took a breather, and returned for their fifth effort in 2011 with North Sentinel Island.

The Copyrights made their Fat Wreck Chords debut with a catchy EP titled, No Knocks. A release New Noise Magazine called “a continuation of the same great quality pop punk that The Copyrights have been delivering for over 12 years now.” Lauded music mag, Alternative Press stated “the difficult task of writing catchy music is one “Illinois pop-punk four-piece, The Copyrights, have mastered throughout the past decade since their humble beginnings.” The band’s next full-length album, Report, was released on August 26, 2014, on Red Scare Industries. Noisey, the Vice imprint, called the album “the stuff that keeps pop-punk alive. The good pop-punk anyway.”

After a seven-year hiatus, The Copyrights are back in full force. On October 22, Fat Wreck Chords will release the band’s new full-length, Alone in a Dome. Known for their blistering live shows and power-pop hooks, Fat Wreck Chords is the perfect home for their high-octane sing-along anthems. Vocalist/bassist Adam Fletcher had this to say about the signing: “It’s been 7 years since we’ve released a new record and hopefully y’all haven’t forgotten about us! We’re excited to be a joining the Fat Wreck Chords family, and we can’t wait to get this album out into the world.”

The band has toured with the likes of Masked Intruder, The Lawrence Arms, and NOFX. This October, they’ll play a bevy of shows including The Fest in Gainesville, FL. It’s safe to say that 2021 just got a whole hell of a lot better.