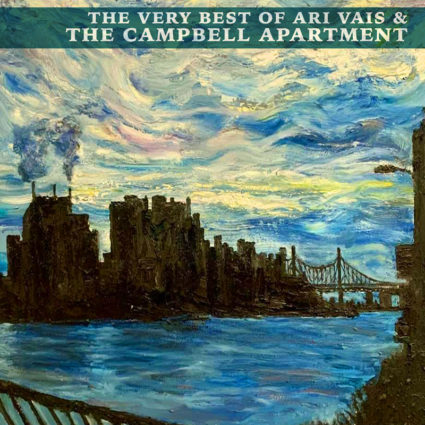 The Very Best of Ari Vais and The Campbell Apartment is a culmination of a 35 year career as singer/guitarist/songwriter/performer and recording artist Ari Vais, focusing on the past 25 years.

Ari Vais, born Arkadiy Tiberevich Vais in Moscow, escaped as a refugee from the former Soviet Union as a child, spending time in Rome, Vienna and Los Angeles before settling in Cambridge, Massachusetts in 1979.  The ultra-bohemian, intellectual flavor of Cambridge suited the Vais family, with his father having a fellowship at Harvard and Ari Vais falling madly in love with the Beatles. His writing began in earnest in mid High School and blossomed while at UMass Amherst and especially his junior year abroad in England, where he opened solo for the likes of Tanita Tikaram, Jimmy Somerville (Bronski Beat), The Violent Femmes, Throwing Muses, & Anastasia Screamed.

Following University, Vais fronted the group Humbert in Northampton, Mass., in the ‘90s, when it was a hot bed of “alternative rock” headed by locals such as Buffalo Tom, Sebadoh, Dinosaur Jr., and later Charles Thompson from the Pixies, English troubadour Lloyd Cole, Thurston and Kim from Sonic Youth, and two members of Fountains of Wayne, singer guitarist writer Chris Collingwood and lead guitarist extraordinaire Jody Porter.  Jody, Chris and Vais instantly became close friends and mutual fans, and are among Vais’s best friends to this day.  Vais’s declining to join Fountains of Wayne on keyboards at the height of their career is one of his only regrets in life.

In the early 2000s, back from London, Vais formed the quartet the Pelicans. They made an EP with the backlog of Vais songs called “London Crawling” about his 1.5 years in the capital city. Soon after, Vais appeared on Queer Eye for the Straight Guy and “Straight Guy” with the band.

After the Pelicans demise, The Campbell Apartment formed and was named after a fancy but hidden cocktail lounge in the bowels of Grand Central Station. Recording their first album under the talented eye of producer Ian Love (Rival Schools) at Love Studios near the Brooklyn Railyards, “Insomniac’s Almanac” was named the 4th best album of 2004 by The Village Voice, and remains to this day a New Romantic classic, as most of his songs focused on women, his love or lust for specific ones, most of them heartbreaking in their futility or ultimate breakups.

Soon after Vais relocated to San Francisco and retooled the group with many players over the years, though they always remained a three piece.  Soon Fountains Of Wayne guitarists Jody Porter moved in with Vais, after pressuring him to write another album, and produced said album over many drug and alcohol fueled all night sessions, “IN!”.  If “Insomniac’s Almanac” was a desperate appeal to love, “IN!” was a big fuck you to love, and in that sense a very different album. Successful European touring followed the album.

Through marriage and a divorce and a new record deal, Vais penned “Curmudgeon” in 2020 an album that Fountains of Wayne frontman Chris Colligwood said this about “Ari has a storyteller’s way of inhabiting these dark spaces, breathing life into each scene by illuminating human nature’s good side and dwelling on it for just long enough before smashing it to bits.” This release showcases over 20 years of a power pop virtuoso that never got his due and we think you’ll agree it’s a voice worth hearing.