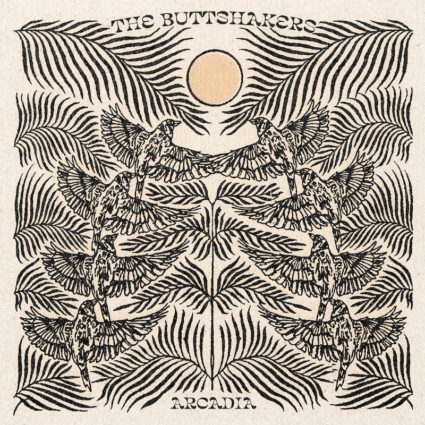 The rewind button brings the tape back several times and, with it, The Buttshakers. From the tape to the studio, the décor changes to an America lost in its own reverie, the America that Ciara Thompson left in 2008 to settle in Lyon, France. Untethered from the idealistic veil of her childhood, this America, her America, now appears in its crudest reality: disfigured by violence and racism, the streets transformed into a make-shift shelter for those without a home.

Black Lives Matter, Not In My Name, #metoo and other red flags light up the soundboard without stopping this desperate and breakneck race to darkness.

Yet, when everything darkens, there is always an afterglow that cannot be extinguished, that final ember capable of rekindling on its own a brazier of hope. This is soul music.

Arcadia, “the land of delights,” a perfect world as described by the poet Virgil. This land where all is beauty and perfection becomes, for The Buttshakers, the place to rally, to unite, a moment of resilience. Not a place of retreat, an escape from reality, but a goal towards which to reach.

On their previous album, Sweet Rewards, The Buttshakers offered a soft light on the romantic side of soul. With Arcadia, they explore its conscious face.

The one which, in the heyday of the 70’s, shone thanks to the albums of Gil Scott-Heron, Marvin Gaye or Curtis Mayfield.

Creation influenced by the political and social events of our times. The form that meets the content in a music that is visceral and raw yet full of finesse and delicacy.

If over-worked productions tend to kill first intentions, The Buttshakers knew, with a skillful movement of the hips, to avoid diluting their intentions in layers of production, always preferring to be as close as possible to the natural source of their music to keep the fire burning. Here we find the sound of a group who has found a solid balance between soul music, its roots and its offspring: blues, rhythm and blues, funk.

A group led by the rugged feline presence of Ciara Thompson who’s vocal prowess, here put on perfect display, finds itself flawlessly balanced between a generous horn section and a devilish groove. A feat, yet once Ms. Thompson takes a step back, the void is quickly picked up, leaving room for the guitar and organ to reverberate, the trombone appropriating the last bars for a funk to the bone solo. With Arcadia, the listener is ushered through the kalediscope, letting the groove drift into an instrumental trans where the robotic beat takes control and sinks into a voudou-psychedelic mystique from which we can only be drawn out by the intervention of the brass section. The dust of a six-string western incantation embedded in the groove like a muffled groan, an explosion that is always on the edge, and which the vocals masterfully contain and amplify.

Leaving behind the compositional automatisms that could have hampered a band that has been playing together for over a decade, Arcadia is their most successful album so far by the sheer audacity of their compositions. With each member of the group participating in the writing process, the richness of each idea put forward illuminates and guides the listener.

Dark and yet still luminous, Arcadia remains true to the spirit of soul : hope out of struggle, light out of fear; even when the cracks expose the darkest side of humanity, soul music has always given us the assurance that out of this chaos, a better day will come. A philosophy on which they built their discography and their stage presence; founding principles that the group has always been faithful to: to awaken the listener, to ignite the fire, to bring the dance.