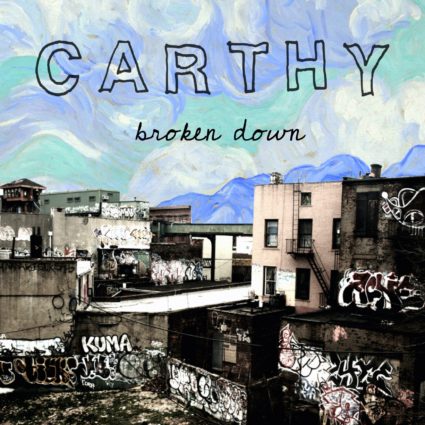 “I’m So Broke” by Texas-based band Carthy is that indie pop ear worm of a tune with an indelible and memorable chorus. The lilting sing-a-long ode to the have-nots ushers in the three brothers’ third album release, ‘broken down’ which is out December 3rd on ClaraNova Records. Hooky and hopeful, “I’m So Broke” transforms a feeling of uncertainty and desire into an evocative yet super catchy testament to holding onto one’s dreams.

Carthy are excited to release their new e.p. ‘broken down,’ (out December 3 on ClaraNova Records) a collection of indie pop songs about unconscious hurt, losing people you love, unrequited desire, flying high and falling low. The three brothers that comprise Carthy – Chase, Drew and Seth have been working on this inspired selection of tunes on and off for a little over three years.

‘broken down’ effortlessly showcases the band’s engaging versatility around a melody and a tune. The 7-song e.p. of self examination highlights Carthy‘s gritty alt-pop leanings on songs like the catchy, sing-a-long odes to the have-nots and ne’er-do-wells with lead single and video, “I’m So Broke” and “No One Will Ever Hear This Song” to the yearning electro pop dramatics of “Over The Moon” to the band’s more plaintive and reflective singer-songwriter roots as demonstrated on the poignant title track ode to personal struggles, “Broken Down” or the warm simplicity of “Irene” a quiet and lyrical love song. ‘broken down’ also features Carthy’s imaginative and slightly ’80’s-ish indie take on the Bob Sinclar dance anthem “World Hold On” as well as a bonus “I’m So Broke” remix by City Rains.

Carthy’s range of influences loom large. They cite everything from classics like Elton John, Elvis Presley, The Beatles, Paul Simon and Queen to newer artists like Twenty One Pilots, Lorde, Taylor Swift, Lady Gaga and The Killers as continuously muse worthy.

The band explain, “‘broken down’ is about contemplating if you’re good enough for whatever it is we’re all trying to be good enough for. It’s about wanting without speaking, wondering with whispered hope, and seeing only darkness while expecting light. It’s an attempt at honest optimism. A pursuit of embracing the chaotic and mundane as something that simply exists and affects us only as much as we allow. All of that to say, let’s be broken down together.”

It was produced and mixed by the band with Gamble & Burke, Jens Bergmark, Ben Runyan and Bill Coleman

Carthy have recently been tapped to compose and perform an original tv theme song, are collaborating with other artists on new projects and are eagerly prepping for a brand new live show.