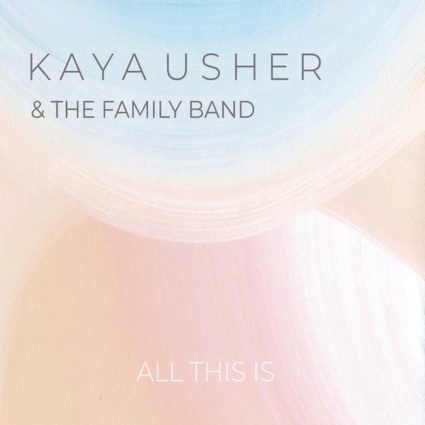 Kaya Usher & The Family Band - All This Is

Kaya Usher and The Family Band announce release date for debut album, All This Is, the realization of a long-held dream with husband Gord Downie (The Tragically Hip)

Produced by Kevin Drew and Nyles Spencer, Usher brings to life her and Downie’s shared vision of creating music as a family with new album featuring two of their four children

Kaya Usher premiered her first single as a recording artist, Heart Clicks, a song about the transcending power of love and the ways in which it unites humanity. Her debut album, All This Is, produced by Kevin Drew of Broken Social Scene and Nyles Spencer. Mastered by Grammy award-winner Emily Lazar, the 10-track project also features Andrea Nann on back-up vocals and two of Usher and Downie’s children, Lou and Willo. Bringing to life the couple’s dream of one day forming a family band, All This Is will be distributed by Arts & Crafts Productions, the label behind Downie’s solo career.

“This is a very personal album for me, not only because I get to jam out with my kids, but also because music has helped me to rise up and transcend what was holding me back,” says Kaya Usher. “Everyone can connect to music. My hope is that this album helps others reach new heights too.”

All This Is represents a reset. It is Usher’s story, told for the first time through a series of songs. Haunting melodies and soul-searching lyrics create an experience for the listener that reflects Usher’s awakening process, a journey that began when she fought breast cancer in her forties. The album speaks to her unraveling, her epiphany and, finally, her metamorphosis.

Kevin Drew met Usher in 2013 through Downie, and they soon became good friends. Their collaboration is heard throughout the album, in its robust compositions, ambient chords and hypnotic rhythms. Featuring her son Lou on keyboard and drums, her daughter Willo on harmonies and Usher playing classical guitar, organ, harmonica and providing vocals, All This Is is an offering almost thirty years in the making.

The project was recorded at The Bathouse Recording Studio — a studio owned and managed by The Hip, near Kingston on the shores of Lake Ontario. The album art was designed by Willo.

The newly launched single Heart Clicks can be streamed here and the accompanying music video, directed by Drew Berry, with visual effects from Jordan Allen (What GIFS) can be watched here.

All This Is is infused with high levels of frequency, found to be beneficial for inducing calm and deep relaxation. The album, which will also be available on meditation app Medito, is an extension of Usher’s frequency work. Her online platform, The Simplicity Platform, offers sessions, classes, recordings and other tools designed to help others achieve a deep state of calm and inner peace. The project is the first in a series of projects geared at healing, self-discovery and growth, with two books on the subject authored by Usher debuting in 2022. More information on the books can be found here.

Kaya Usher is a Canadian artist, musician and frequency work professional currently residing in Southern Ontario. Her work helps others to heal, discover and grow.

At 20, Montreal native Usher met Gord Downie at university, and fell madly in love. A talented lyricist and musician in her own right, Usher stayed home and raised the couple’s four children. But in private, Usher and Downie would sing duets at family functions and share creative ideas. Their life together was a ride of experiences and themes that have made it into All This Is.