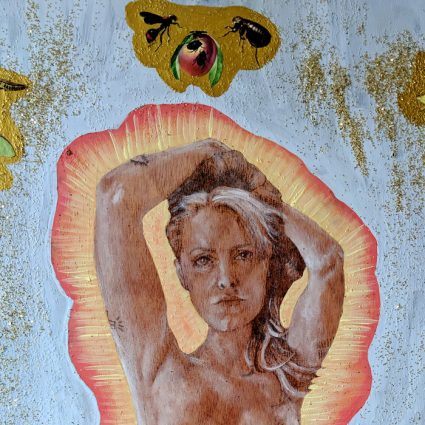 String Machine - Death of the Neon

“String Machine are the future of indie-rock” – The Alternative

Soaring ethereal rhythms and melodies, and the doomed tenderness of where hope and hopelessness dance among the faded soon-to-be ruins of ill-maintained state highways tearing through rural and postindustrial landscapes. The soil here isn’t as fertile as it once was, but sometimes a collective of voices breaks through the frostline. For those who see no future, the future is wide open. This is the landscape from which String Machine emerged. Some of their neighbors are farmers, still pulling what they can from the earth, but more often than not selling off parcels of land to developers who bulldoze off the topsoil, name their housing plan Pasture Place or some such insult, and name the streets after the wildflowers that used to grow there. Those who inhabit these plans live separately from those who live in older, more rural confines. A simple socioeconomic separation. Further along we see the post-industrial wasteland, now operating at a fraction of its capacity, employing contractors and employment agencies and any such measure to ensure they pay the lowest possible wage, avoid providing benefits, and maintain a workforce that can be scrapped as quickly as the barrels of slag stored in the back lot. There is a city to the south. To get there we drive through this romantic memory of family farms and some distant 1970’s era vision of self-liberation through labor and industry, through towns long since conquered by opiates. For String Machine, the decision was simple: reject this life they inherited, move ahead fearlessly with the lessons each of them has learned among the frozen ruins of rural western Pennsylvania (northern Pittsburgh, PA).

Originally a solo project, David Beck enlisted a number of friends to help him see his vision through. Soon enough those musicians shared his vision, and String Machine grew into a collective, shared project. They released Threads from the Youth Fossil in 2017. A beautiful debut, really, but perhaps it’s best to speak of this album, Death of the Neon, as their collective debut. Their first conscious effort to make an album as a band, it came with a lengthy period of having to discover how to creatively work as a unit of 7 people. After a busy stretch of playing countless shows and embarking on mini-tours, they self-isolated into their rural Saxonburg home studio, remaining reclusive until they had an album they were collectively happy with.

Through the strength of 7 incredibly talented individuals, Death of the Neon experiments with layers of musicality, emotionality, fragility, and an inimitable ability to render avant-garde imagery into relatable terms. The listener feels empowered, yet invited into the band’s personal vulnerabilities. It would be easy enough to make an attempt at some pointless term of categorization: psychedelic folk, indie rock, post-folk, or if this were the 90s they would probably be dumped into that “alternative” catch-all. But to experience String Machine, either live or on Death of the Neon, is to enter a unique musical world, a world where a wall of sound provides joy while wondering if joy is possible, lays bare the musicians’ wounds while soothing yours, and gives us something synesthetic – these aren’t just songs for your ears; they will resonate throughout your entire body.

Death of the Neon was originally self-released by the band on August 2, 2019 and will be re-released by Know Hope Records on January 17, 2020.