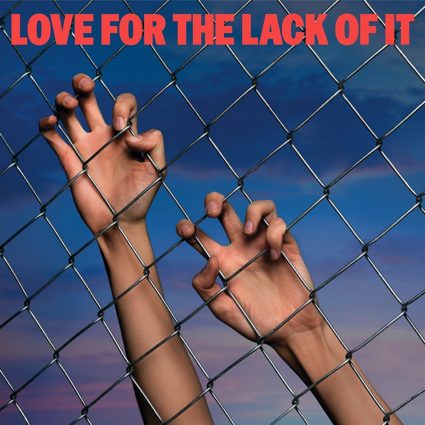 Souvenirs - Love For The Lack Of It

“The more somber tone is fitting for an album that was born out of struggle like this one was.” – BrooklynVegan

Three years ago, the entire ethos of Southern California’s Souvenirs flipped when front person Tim Riley (he/him) received a medical diagnosis that put everything he felt about the band and himself into question. Their new album Love For The Lack Of It tells Tim’s story, from the lowest moments to the powerful perspective shift that becomes this album’s thesis.

To be in your 20s, on the road with your band, and newly married to the love of your life, the last thing in the world you want to hear from a doctor is that you might be able to grab a pencil within a couple of years, but that’s exactly what Riley heard when receiving his diagnosis of stage 3 rheumatoid arthritis. Suddenly the things that brought him peace and defined who he was were growing more challenging by the day. Nevermind newlywed bliss: he could barely fold a towel or help his wife around the house. Within just a year’s time, Tim Riley’s entire life changed––and he didn’t always want to live it.

But Love For The Lack Of It is not a sad record, or at least it doesn’t end that way. While it expertly documents Tim’s lowest moments after receiving his diagnosis, it ends with an overwhelming message of hope and compassion. “If only we felt enough / if only we felt the love,” Riley sings on “Feel Enough.” It’s a quote from Zach Bush, a specialist in internal medicine, endocrinology, and hospice care, but it might as well be the whole damn point of the record. Through all of this, it took losing everything he identified with himself for Tim to finally understand that he is worthy of love just as he is.

Sonically, there’s a new sensitivity to the Souvenirs sound on Love For The Lack Of It; some of Riley’s biggest influences while writing it were Death Cab For Cutie, Pedro The Lion, and Jets To Brazil. It makes sense considering the deeply emotional nature of both his and the band’s transformation, but their years spent cutting their teeth on the road with bands like Nothing, AFI, Basement and more still find their way into the record.