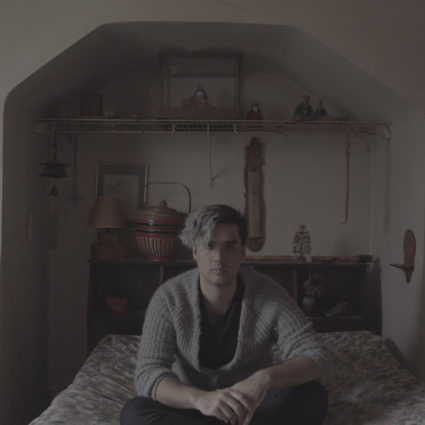 The dark ending does not cancel out

The brightness of the middle.

Your day of greatest joy cannot be

Dimmed by any shame. ~ from Tony Hoagland’s “I Have Good News”

“Kaigo Kioku Kyoku”, which translates into “Caregiving Memory Songs” in Japanese, is the culmination of from his two-year long experience as a live-in caregiver for his grandmother with Alzheimer’s, and uncle with terminal cancer. In a further nod to the circular nature of life, the house in which Tanaka cared for his relatives was also the one he was born in.

Combining the sounds of objects collected from the house, voice recordings of his relatives, and structuring the songs off of hymns and Japanese folk songs, Tanaka has created a “sonic archive” to preserve his unique family history, and document the stark reality of being a caregiver.

Hiroki has been playing in bands since his teenage years and spent the last half-decade as the lead guitarist of YAMANTAKA // SONIC TITAN. With YT//ST he toured USA and Europe multiple times, was nominated for a Polaris (for 2018’s “DIRT” LP) and won a CVGA for their video game soundtrack for Drinkbox’s “Severed”. Striking out as a solo artist for the first time, he is bringing his experience as a professional touring musician with him. The result is a cathartic album that is as lush and virtuosic, as it is raw and intimate.

The song “Snowdrops” begins with a rendition of the Japanese folk-song, “Sakura”, which transforms into a mantric rhythm, and overlays the music with a recording from his grandmother. The beginning of Eternal Host” takes its chords from the hymn, “Home! Sweet Home!” and turns it into a sludgy wall of guitars, before shifting into a head-nodding beat. Each song is laced with lyrical details that hold no punches, putting words to the experience of caregivers that is so rarely heard, and so often unacknowledged.

While demanding more than a casual listen, Tanaka’s work is for the burnt-out caregiver, who is hoping for someone to reach out to them and say, “I know how difficult this is for you”. It is for those listeners who cannot shy away from mortality, for those who want to embrace life in both it’s pain and joy. While the story is ultimately about Tanaka and his family, “Kaigo Kioku Kyoku” strikes a vein of universality, that speaks to anyone who has lost a loved one in their life.