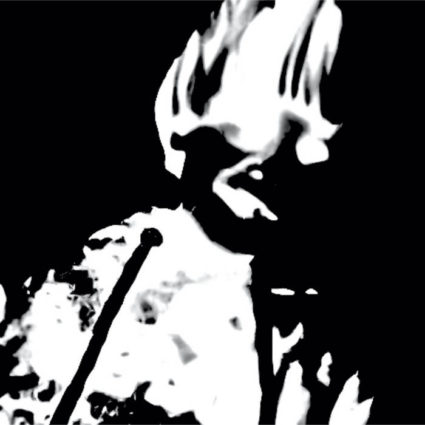 “One of the most authentic and magnificent albums you’ll hear this year.” – Punktastic

“It is pure, honest expression, art for art’s sake, capturing a spark before it vanishes, whatever form that may take in the finished product” – Kerrang (4/5)

“I don’t have a mission statement. I just do what feels exciting to me.”

That’s Greg Puciato talking about his solo debut, Child Soldier: Creator Of God. But it’s also where he’s at creatively after 16 years in the trenches with The Dillinger Escape Plan and a few more years making a completely different type of music with The Black Queen. On Child Soldier, Puciato integrates the unhinged aggression of DEP with the electronic textures of TBQ while simultaneously branching out into a constellation of new directions.

“This record is me declaring ultimate freedom,” Puciato says. “With The Black Queen, I wanted to do something completely opposite from The Dillinger Escape Plan and show everyone that I’m more than just one thing. Ultimately, I realized that I’m both of those things—and all of this other stuff, too.”

The songs on Child Soldier run the gamut from industrial ragers (“Fire For Water”) and electronic pop (“Temporary Object”) to grinding noise rock (“Deep Set,” “Do You Need Me To Remind You”) and the acoustic opener “Heaven Of Stone.” With 15 tracks spread across 65 minutes, it’s all the result of a creative spurt in which Puciato found himself writing music that wasn’t appropriate for either TBQ or his other band, the metal supergroup Killer Be Killed. Instead of viewing that incompatibility as an obstacle, he saw it as an opportunity to get one step closer to where he wants to be.

“I’ve thought a lot about this, because I sometimes feel guilty that I don’t have a definitive purpose for making music,” he explains. “When you’re in a band like Rage Against The Machine, you have so much purpose. Or if you’re a person who’s really depressed who makes really depressing music to cope with it, that makes a lot of sense. But I don’t have a brand. I’m not trying to be any one thing over and over again, just myself.”

“I wish I was super creatively riled up about politics or art versus commerce, that would make for easier explanations, but I’m not,” he adds. “It’s all completely self-driven and rooted in the excitement of process. And it happens in really small increments—like I’m excited to make this video, and then I’m excited to go write a song, and then I’m excited to do this other project with someone else. It’s a million little strings that I’m constantly pulling at to form this bigger picture. And when I stop and look in the rearview, there’s a lot of wild sh!t back there that doesn’t seem to have anything to do with each other. But it does, and none of it feels unnatural to me. It feels very normal because I don’t know anything different.”

Puciato plays everything on Child Soldier except drums, for which he enlisted his friend Chris Hornbrook of Poison The Well, former DEP drummer Chris Pennie and his Killer Be Killed bandmate (and Converge drummer) Ben Koller. The album was produced by Nick Rowe—who has worked with everyone from Lamb Of God and KBK to Vampire Weekend and Madonna—and mixed by Steve Evetts (DEP, The Cure). Child Soldier will be released on October 23rd by Federal Prisoner, the label Puciato recently started with visual artist and frequent TBQ collaborator Jesse Draxler.

In the end, Child Soldier is about self-realization. “I’m just trying to be the most me version of me that I can possibly be,” Puciato says. “The times in my life when I’ve been depressed or felt severe anxiety and panic, I look back on them now and I realize it’s because I wasn’t being a hundred percent real with my representation of myself. But now that I can do whatever I want, I feel f*cking great.”