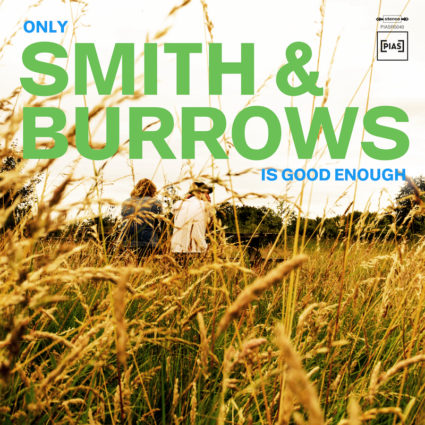 The Ballad of Smith and Burrows could go a little something like this.

Singer in Europhile synth-guitar band meets drummer in Americana-channelling out-and-out rock outfit. Bond over musical interests, both shared (“we’re children of Britpop. That Nineties explosion of guitar bands are the reasons we’re doing what we do”) and disparate (“Seventies and Elton John”, on the one hand, “REM, Eighties, a bit darker” on the other). Record a cover of Black’s deathless 1987 ballad Wonderful Life at home “just for fun”, then realise “there’s something in this”. Record more covers, and four originals, realise the results are pleasingly “wintry” and release them as the album Funny Looking Angels, which is that rare and elusive thing: a seasonal LP that rewards repeated listening. Critics, fans and concert-goers agree.

And then, for the best part of a decade, silence from the duo. Life, children, other projects took over.

Alas, Smith and Burrows: it was good while it lasted.

“We did always think we’d do another album,” begins Andy Burrows, former drummer in Razorlight. “We always knew we’d do Smith and Burrows part two, because we knew we could do something great together,” echoes Tom Smith, frontman with Editors. It was just all about finding the time.

For a good few years, with musicians this in-demand and busy, that wasn’t so easy. Multi-instrumentalist Burrows is a prolific solo artist, a popular stand-in musician (both We Are Scientists and Tom Odell have called on his services as a writer and for extended periods of touring) and Ricky Gervais’s musical wingman of choice: he wrote songs for (and acted in) David Brent: Life on the Road and has scored both seasons of the comedian’s hit Netflix series After Life.

As the group’s main songwriter, multi-instrumentalist Smith has been at the helm of Editors for six albums, a remarkable run – accelerated by incessant touring – that has seen the five-piece become one of the biggest British bands across Europe. Last year they summed up their 15-year career in a 16-track greatest hits, Black Gold. Away from the band, Smith has also been working on an album with Italian composer Luca D’Alberto.

No wonder their creative minds and energies were often elsewhere.