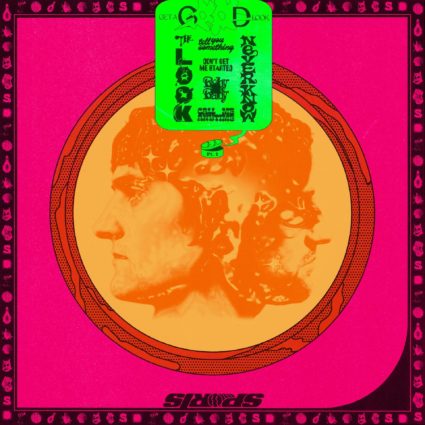 Oklahoma dream-pop duo Sports (Cale Chronister + Christian Theriot) have released their new project, Get A Good Look Pt. 1. Across six tracks, it effortlessly blurs the lines between synth-pop, indie-funk, disco, and psychedelic rock and marks the beginning of an exciting new era for the band. Two years in the making, the project has seen the band through many changes. “It’s been such a marathon,” Chronister says about the process. “I’m just happy we got it done and I’m happy with every second.” Theriot adds, “Hopefully we’ll be able to play these songs live sooner than later.”

The newest single, “Call Me Anytime,” is a sauntering slow burn that hypnotizes through repetition before culminating in a rippling guitar solo.

Chronister says about the track,“This song came from a jam we did back when we were writing for Everyone’s Invited. It’s a completely different idea now than it was then. Then, it was just these stabby chords and me singing ‘you can call me anytime’ over a bunch of noise. Now it’s much more finessed rock ‘n’ roll, which I love. I re-demoed it a year later with Pink Floyd in the brain, then we just re-tracked everything. I recorded a lot of the yells with the lights off. I was standing on a chair most of the time. It was just so fun to make this song.” He adds, “I love the repetitive mantra. It’s me saying goodbye to someone. One of my favorite Sports songs ever.”

Theriot notes, “The guitar solo that happens at the end of the song was something our producer Chad Copelin started playing around with toward the end of the day. I think we kept most of his messing around first take. He bends up to a ‘wrong’ note that I just can’t get enough of.”

Sports introduced Get A Good Look Pt. 1 with “Tell You Something.” The experimental and innovative track features crunchy drums, whimsical flourishes, and layers of trumpet through the bridge. A resurrected demo from years ago, it recalls Chronister’s teenage obsession with Phoenix.

Following “Tell You Something” came “Never Know,” a swanky embodiment of the highly relatable ‘I can’t do anything right’ attitude, and lead single “Baby Baby,” which was featured on SiriusXM Alt Nation’s Advanced Placement, debuted at #23 on the NACC Singles Chart, and received extensive editorial support on streaming platforms. While “Baby Baby,” subdued and vulnerable, explores the vicious cycles of codependency, “Never Know” is groove-fueled angst. Then there’s “The Look.” With bubbling bass, syncopated guitars, and memorable vocal melodies over a propulsive four-on-the-floor beat, “The Look” is a disco-driven, danceable earworm. To round out the project, “Don’t Get Me Started” bites with punctuated rhythms as it doles out frustration with the music industry.

Sports first introduced themselves with their 2015 debut single “You Are The Right One.” Their debut project, Naked All The Time (2015) and its follow-up, People Can’t Stop Chillin (2016) delivered additional critically-praised singles including: “Panama,” “Whatever You Want,” and “Someone You’d Rather Be Dating.” The band returned in 2018 with their first full-length album, Everyone’s Invited, a vibrant offering that received acclaim from Pitchfork, Pigeons & Planes, and Ones To Watch, in addition to earning plays on KCRW’s Morning Becomes Eclectic and Spotify’s New Indie Mix playlist.

Growing up on the outskirts of Tulsa, Oklahoma, life for Chronister and Theriot revolved around watching MTV and going to church. The pair first met in middle school and formed an instant connection, both seeking to break out of the conformity of their quaint small town upbringing. “We have been making and recording music under different names since we were about 13,” they share. The genesis of Sports would come almost a decade later. On choosing the name Sports, Chronister and Theriot show reverence to their parents. “They’re big sports fans. It’s like we’re fulfilling some childhood dream of being in the NBA.”