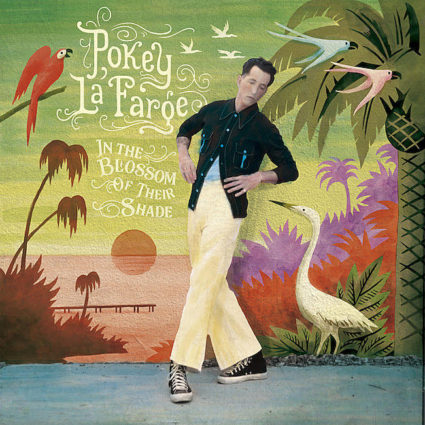 Pokey LaFarge - In The Blossom Of Their Shade

Pokey LaFarge will return with In The Blossom of Their Shade on October 15th via New West Records. The 10-song set was produced and arranged by Pokey LaFarge and Chris Seefried and recorded in Chicago, IL & Los Angeles, CA. The collection is the follow up to LaFarge’s critically acclaimed 2020 studio LP Rock Bottom Rhapsody which NPR’s Fresh Air named a “Best of 2020” and an “Album that made an art of escapism.”

NPR All Songs Considered premiered the first single and lead off track “Get It ‘Fore It’s Gone.” Speaking to NPR Music, LaFarge offered, “This album is a result of my 2020 experience. Before the pandemic, I was in a dark place but the pandemic actually created the much needed space for me to reflect. Turns out that being completely sedentary for once was a good thing. I found peace in the stillness. I was able to recalibrate what it is I do and why I’m doing it. Who I’m to do it with and most importantly, who I’m doing it for.” See the Brandon Bernath-directed video for “Get It ‘Fore It’s Gone” here. Brooklyn Vegan also premiered the album highlight “Rotterdam,” which can be heard here.

In March 2020, LaFarge packed up and left his Los Angeles abode behind, putting his belongings in storage in anticipation of spending extensive time on the road in support of his then-forthcoming album, Rock Bottom Rhapsody. He couldn’t wait to head down to Austin a few weeks later to showcase those songs and launch the album with his band at SXSW. Then the pandemic hit and all of LaFarge’s well-laid plans went into thin air.

Stuck in East Austin with nowhere to go, LaFarge did what he does best: he got to work. He used the sudden change in plans to his advantage, having perhaps his greatest period of personal growth in the midst of the crippling pandemic. Unlike its melancholy predecessor, In the Blossom of Their Shade showcases the positivity of coming out of the darkness and into the light and is one of his strongest and most mature lyrical efforts to date. The record was nearly titled Siesta Love since it captures the thematic notion of being the perfect summer afternoon soundtrack and is a far cry from the swing and blues-infused songs of his earlier work. Looking in, inspired by the deep soul not just from these shores, but from distant geographical places like Africa or South America, LaFarge set out to create a body of work that paired emotional lyrics with a killer groove and grabby melodies.

Pokey LaFarge never wanted to be an artist that had one gigantic record and was then lost to the annals of history. As for now? He’s back to where the whole odyssey began over a year ago: Los Angeles. Even with In The Blossom of Their Shade on the horizon, LaFarge hasn’t put down his pen. You can’t keep a great songwriter idle.