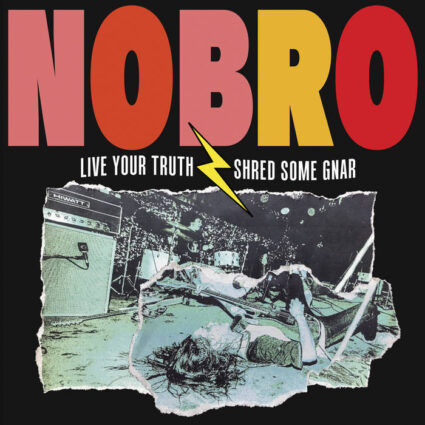 “An album title like Live Your Truth Shred Some Gnar tells you a lot about a band. It suggests loud, catchy, extremely fun rock ‘n’ roll, which is exactly what NOBRO are serving up.” – Stereogum

“A ripping kiss-off anthem that shreds nothing short of an abundance of gnar.” – Exclaim!

“a truly anthemic ripper that fits in nicely next to anything from classic Lookout! Records to NOBRO’s pals PUP.” – BrooklynVegan

On Live Your Truth Shred Some Gnar, Montreal’s NOBRO offer seven new searing examples of scorched earth rock and roll. It follows their 2020 debut EP for Dine Alone Records, Sick Hustle, which Exclaim! described as, “filled with enough excellent shredding to sell even the toughest punk snob on this band.”

Originally formed by bassist/vocalist Kathryn McCaughey, the quartet that also includes guitarist Karolane Carbonneau, drummer Sarah Dion and keyboardist/percussionist Lisandre Bourdages has been winning fans since a breakout performance at the 2017 WayHome Festival and subsequent tours with FIDLAR, PUP, Alexisonfire and The Distillers.

Working once again with producer Thomas D’Arcy (July Talk, The Sheepdogs, Yukon Blonde), the main job of Live Your Truth Shred Some Gnar was to harness NOBRO’s raw power with heavy doses of fun and flair. That’s brilliantly displayed on standout tracks such as first single “Better Each Day,” “Eat Slay Chardonnay,” and “Not Myself,” the last created with Juno nominee Terra Lightfoot.

Call them punk rock if you like, but its long-held perceptions are just some of the things NOBRO are here to challenge—in the loudest and most exciting way possible.