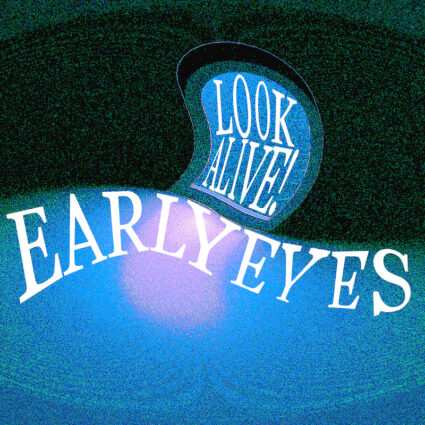 It’s a foreboding time to make pop music. But like a sunbeam peering through a haze of wildfire smoke, Early Eyes have somehow persevered through dashed dreams, fractured relationships, historic social justice uprisings in their own hometown, and a society tearing apart at the seams to make an album that is both responsive to the chaos and wearily optimistic.

“It almost feels like Look Alive! is a direct response to the pandemic,” bandleader Jake Berglove reflects. “It was like, oh, my goodness, all of our capitalist anxieties just came true! We took all of that anxiety and angry energy and put it into making a really f*cked up album.”

“The album was not just an expression of all of our frustrations, but also an escape from it,” adds guitarist Joe Villano. “And I feel like the process of making it really carried us through the year.”

Look Alive! vibrates with angst, punctuated by computerized glitches and disintegrating threads of abandoned melodies that echo in the distance before roaring back to life. A track like “Chemicals” will begin with Early Eyes’ signature buoyant and catchy pop-rock, but as the song progresses it grows more ominous before shattering apart in an earthquake of rattling, subterranean bass.

Early Eyes signed to Epitaph Records in January 2020 and put out their first singles with the label that march—just as the pandemic brought the entire music industry screeching to a halt. As weeks turned into months, and as their city of Minneapolis imploded in a catastrophic moment of fury, grief, and protest, the band alternated between doing what they could to support mutual aid efforts and holing up in the studio to channel their complicated emotions into song. Along the way, they also parted ways with their previous rhythm section, further escalating their sonic reinvention.

“It kind of gave us an entirely new identity,” Jake says. “It almost feels like we’re completely different people. The three of us who were remaining wanted to pursue this new direction with the band and kind of embrace the chaos that comes with living in 2021.” Away from the gaze of the public, they were free to make whatever best captured their mood in the moment. “We would write stuff previously with the understanding that we are writing to play live,” guitarist John O’Brien says. “And then when playing live stopped being a thing that we had to worry about immediately, we were able to approach the songwriting process with a different mindset, being more production oriented, creating impossible textures and sounds.”