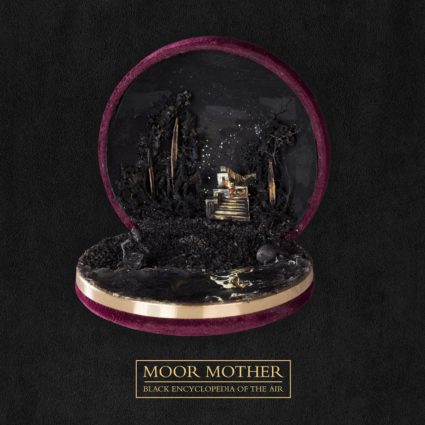 “With Black Encyclopedia of the Air, Moor Mother uses her genre-agnostic style to tackle to world’s most popular genre and make it undoubtedly her own” – Exclaim! album review (9/10)

As Moor Mother, she released her debut album Fetish Bones on Don Giovanni records to critical acclaim in 2016. Fetish Bones was named the third best album of the year by The Wire, called “one of the most innovative and important records of 2016” by Jazz Right Now, and appeared on numerous end-of-the-year lists from Pitchfork, Noisy, Rolling Stone, and Spin. She was named one of Rolling Stone’s “10 New Artists You Need To Know” in October 2016, as well as one of Bandcamp’s 2016 artists of the year. (Camae’s debut book of poetry, also called Fetish Bones, was released by The AfroFuturist Affair.)

She has released multiple albums every year since Fetish Bones. In 2017, CTM X Vinyl Factory commissioned her album The Motionless Present; this was followed by Crime Waves, a collaboration with fellow Philly producer Mental Jewelry, and Clepsydra, “a collection of sounds for writers.”

In 2020, she launched a series of releases with Swedish musician Olof Melander. Titled Anthologia, the projects are designed to raise funds for disability justice. She worked again with Melander and Mental Jewelry on Forever Industries, a 2020 release which features two jazz-tinged experimental hip-hop singles that speak of making space, outer space, and industry. Most recently, Ayewa put out BRASS, a collaboration with the rapper billy woods. She has previously worked with woods on his critically acclaimed 2020 album Shrines and on the song “Furies,” which was featured on the Adult Swim single series.

As Moor Mother, she has performed at Berhaign, Borealis, CTM Festival, Le Guess Who, Unsound, Flow and Donau Festival, Rewire, Boiler Room and MOMA PS1. She has been highlighted in magazines including Quietus, Interview Magazine, The Guardian, Crack, and Pitchfork. (continue reading bio on downloads page)