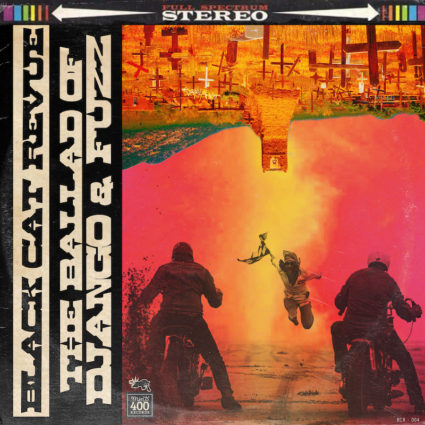 “An acid drenched West Coast jangle affair that feels like it was recorded in a Berlin coal cellar.” – Shindig Magazine

Since their inception in 2014, Glasgow garage rock outlaws BLACK CAT REVUE have paved their own trail of scorched earth across the Scottish music scene with their hazy brand of psychedelic garage rock n’ roll.

Wearing influences on their sleeve such as The Velvet Underground, Love, Spacemen 3 and The 13th Floor Elevators amongst many others, the quintessential Black Cat Revue line up was settled in 2018, consisting of co-founders and songwriters Jimi Jung Jnr (Guitar/Vocals), Smokey Barosso (Guitar/Vocals) joined by Arthur T. Rabbits (Bass) and The Spider (Drums).

Playing shows all over the UK, Black Cat Revue have shared the stage with many respected touring artists including The Fall, Glasvegas, Night Beats, Acid Mother’s Temple and Matt Hollywood & The Bad Feelings amongst others. Their unique blend of jangle and fuzz has established them as a cornerstone of Glasgow’s psychedelic rock n’ roll scene.

After signing with New Jersey record label MINT 400 in late 2020 with the re-release of debut EP Fortune Favours The Strange in March 2021. Black Cat Revue have returned with a new taLe to tell with their sophomore EP, entitled The Ballad of Django & Fuzz.