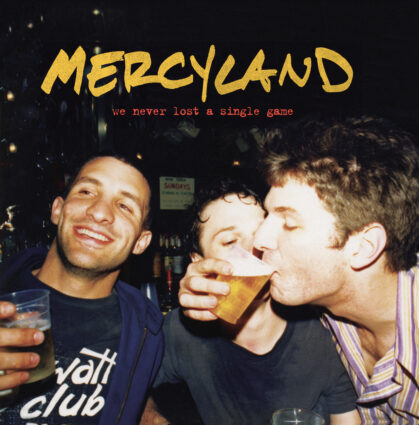 Bob offered a quote for the release:

“Well-crafted songwriting, high-quality recorded output, and dynamic live performances made Mercyland one of the most vibrant bands of the mid-1980s Athens pop-punk scene.” – Bob Mould

Legendary Athens, GA post-punk trio Mercyland share a video for their new song, “Service Economy,” available today on all streaming platforms. Written by guitarist Andrew Donaldson while he was working at the breakfast-focused Southern restaurant chain Shoneys, the dead-end job anthem is the third released from the band’s long-overdue final album, We Never Lost a Single Game, arriving via Propeller Sound Recordings on Friday, September 16.

Featuring nine songs originally recorded in 1990 but shelved following Mercyland’s 1991 dissolution, We Never Lost A Single Game was heralded with the releases of the songs, “Freight Train” (featuring John Keane guesting on pedal steel) and “Uncle.”

To celebrate the release of We Never Lost A Single Game, Mercyland will be playing their first live shows in 12 years (they reunited once in 2010, and once before that in 1994). The first show will be at 529 in Atlanta, GA (their first appearance in Atlanta in 32 years) on album release day, September 16, with Donkey Punch and Saddam Death Cave; and the next one will be at the 40 Watt Club in Athens, GA, September 17 with Elf Power.

Formed in 1985 in Athens, Ga., by vocalist/bassist David Barbe (later invited by Bob Mould to join Sugar and now an award-winning producer/engineer known for his work with Drive-By Truckers, Son Volt, The Glands, and Deerhunter, to name but a few), Mercyland played a visceral style of post-punk that was both perfectly contemporary and quite ahead of its time. The trio, which also featured guitarist Andrew Donaldson and drummer Joel Suttles, took inspiration from such American underground peers as The Minutemen, Hüsker Dü, Dinosaur Jr, and The Replacements while expertly synthesizing those influences into a coruscating, adrenaline-charged sound all its own.

Known for their exhilarating live performances at such renowned venues as Athens, GA’s famed 40 Watt, Mercyland’s lone full-length release, 1989’s No Feet on the Cowling, seemingly tipped the band for a higher profile, especially as major labels began turning their attentions to burgeoning indie and alternative scenes across the country. Instead, Mercyland broke up in 1991, relegating music recorded for a planned second album to be released on a series of now-rare 7-inch singles and compilations. Three decades later, these remarkable nine songs have been remixed by Barbe and reassembled as We Never Lost a Single Game, providing a crucial historical document of this criminally unknown band.

Songs such as “Tough Ass Knives” and the album-opening Mercyland manifesto, “Minutes and Parts,” see the band nodding to the jagged rhythms coming out of the Washington, D.C. post-hardcore scene while simultaneously shrugging off parameters and expectations in search of something visionary and impossible to pigeonhole.

“We’d call our music punk rock,” Barbe says, “because to us that meant a kind of music that was independent, but it didn’t have to be leather jackets, spiked hair, and ‘fuck you.’ You don’t have to be bound by anything just because other people use it as a constrictive device. For me, the simplicity of the format allowed me to go anywhere I wanted to.”

Having spent the years that followed Mercyland working as producer, engineer, writer, and musician on hundreds of projects by a wide range of artists at his Chase Park Transduction independent recording studio in Athens, Barbe is thrilled to have revisited the band’s still-striking music so long after its initial creation, with We Never Lost A Single Game now standing tall as a fascinating, alternate-universe peek at what might have been.

“Nowadays, my job is taking what people have in their head and helping that come out of somebody’s speakers,” Barbe says, “but at the time, I wasn’t an engineer and I never felt happy with the way our stuff sounded. The techniques that were prevalent in studios in the late 1980’s were not what we were after. On these remixes, I stripped it down and got it back to what we intended it to be in the first place. I just didn’t have a way to convey that to other people back then.”