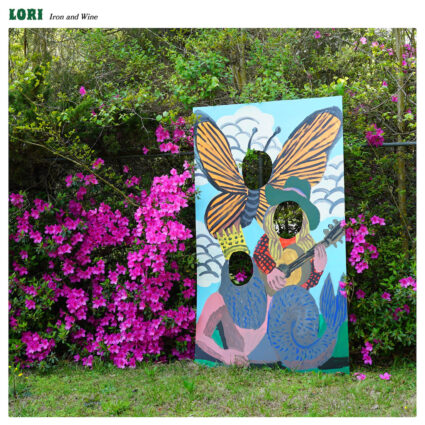 Timing they say is everything and as preparations are underway for the fourth – or is it the fifth? – wave of the pandemic, Iron & Wine is finally ready to share their obligatory covid covers release in the form of LORI. LORI finds Iron & Wine drawing from the songbook of noted singer- songwriter and multiple Grammy winner Lori McKenna.

Traveling to Memphis in March of 2021, just as restrictions were lifting, was a welcomed opportunity to create – even at a distance – after being housebound the previous year. Beam invited Cunningham and Stewart whom he had toured with during his Beast Epic campaign to join him in the studio. Recording took place over three days with Ross-Spang at the helm. Ross-Spang was a logical choice as he had handled Iron & Wine’s collaboration with Calexico, the Grammy nominated Years to Burn, and in completing the circle for Beam, had worked on two of McKenna’s own records.

Beam had come to McKenna’s music a few years ago on the suggestion of a friend; as the lock down dragged on, Beam found himself like so many turning to music as comfort. McKenna’s catalog of work was never far from reach. Taken by her heart-on-your-sleeve confessional style storytelling, Beam admits it is something that draws him to McKenna and something not often found in his own songwriting. As a well-known interpreter of other artists’ songs, when the time came for him to shake off the pandemic cobwebs and record, McKenna’s songs were as fresh and familiar to Beam as his own.

The special sauce on LORI however comes in the formidable talents of Sima Cunningham and Macie Stewart. Having enjoyed successful solo careers outside of Finom, the two bring their own touches to LORI and helped Beam find even further depths to McKenna’s songwriting. Together the three sonically re-interpreted McKenna’s plaintive odes into a tapestry of sounds while effortlessly blending their signature singing styles to breathe fresh life into the lyrics.

The track “That’s How You Know” will be available on Iron & Wine’s Black Cricket Recording Co. digitally now coinciding with the release of a video directed, concepted and animated by Nebila Oguz. The whole EP will be available digitally worldwide on September 16th with vinyl to follow and pre-sales starting Sept 16 via Iron & Wine webshop.

Catch Iron & Wine on tour with Andrew Bird as part of their Outside Problems Tour this September / October. Tour dates are here, contact us with any requests.