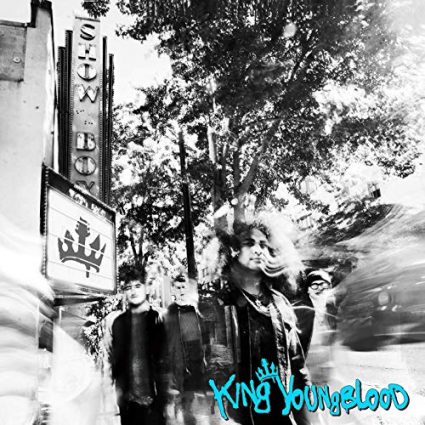 King Youngblood (formerly Gypsy Temple) has a singular mission: grab alt-rock by the collar and drag it into the waiting arms of a new generation. The Seattle group’s self-titled debut album is a bold declaration that unironic, melodic rock ’n ’roll continues to stand tall as a vibrant medium of self-expression.

Poised to be a historically important piece of art, the album is delivered by lead vocalist and principal writer Cameron Lavi-Jones. A record that reflects the band’s undeniable energy and truth, King Youngblood is here to bring euphoric sonic catharsis to the masses.

Though band members are all freshly out of their teens, the execution matches the ambition; the band’s thoughtful, dynamic songs are fit for the stadium. All classically trained musicians that came up through public school music programs, Lavi-Jones and bandmates Cory Cavazos and Hamoon “Moon” Milaninia teamed up with Maurice Jones Jr. (Neville Brothers, Peter Gabriel) and multi-platinum producer Phillip Peterson (A$AP Rocky, Portugal the Man, Pink) to craft an undeniably arresting debut LP.

​Sonic lighting in a bottle, King Youngblood successfully captures the palpable electricity of the band’s unstoppable live shows — performances that have earned King Youngblood opening slots for the likes of Pearl Jam and Naked Giants. As Lavi-Jones describes it: “King Youngblood is about putting the world on notice that there is an army of dedicated, intelligent, progressive young people coming up — and coming in the wake of the current government and resurgence of blatant racism, and all of the reactionary badness going on right now — we are here to dial this s#*t back.”

Embracing intersectionality, Lavi-Jones explains, “All of us, the band and the team behind us, are extremely conscious of issues of race and culture. We think about the challenges for people of color because our tribe is comprised of a United Nations of ethnicity.

King Youngblood is as revolutionary as all the great Northwest bands before them. This album is universal pure musical excellence, a lovingly crafted collection of technically challenging tracks all of which could be singles in their own right. King Youngblood is beautifully crisp, deeply soulful, and elegantly strong.

Says Peterson, “Cameron Lavi-Jones offers the best vocals and lyrics of the year. Paced like the ideal novel, King Youngblood folds out in multi-levels inside itself, of revelation, confession, musical extrapolation.”

The band is as committed to activism as they are to music. King Youngblood is openly and deeply involved with the National Association for Mental Illness (NAMI) and the King County Regional Mental Health Court. “The song ‘Up Becomes Down’ was written aout a dear friend who was going through a hard time dealing with gender issues coupled with depression. ‘Whenever Up Becomes Down’ / I will always be here holding your crown” explains Lavi-Jones.

NAMI has enlisted King Youngblood as the face of their youth outreach program “End the Silence” at the national level. This is from the same band, who in the fall of November 2018, received a grant from the League of Women Voters to perform at over 80 high schools, registering over 3,200 new voters.

The band has launched their own non-profit 501 c3 organization called Hold Your Crown – dedicated to changing the culture for America’s youth regarding mental illness and getting to the path to mental wellness.

The band is currently in studio with Adam Kasper (Mudhoney, Nirvana, Foo Fighters, Queens of the Stone Age, R.E.M., Pearl Jam) working on 20 new songs for 2020!

“Throughout my career as a producer and mixer, I have had the privilege of working with some of the most talented and amazing musicians in the Rock and Alternative Rock Universe. In Recording Studios all over the world I have worked closely with bands like: Aerosmith, R.E.M., Nirvana, Soundgarden, Weezer, Pearl Jam, Foo Fighters, Queens of the Stone Age and too many others to mention. I can honestly say, in terms of pure overall talent, songwriting, drive, and stage presence ‘King Youngblood’, is one of the most complete artists I have ever worked with. The heart and soul of King Youngblood, Cameron Lavi-Jones (who just turned 21 years old), reminds me of the early beginnings of the Foo Fighters and a young Dave Grohl long before they became the mega-band they are today. King Youngblood, however, is an absolute original and this band is poised to have a long successful career. Finally, adding to their amazing live energy and very dedicated fan following, the Social Causes and Activism the band members are personally and passionately engaged in, show the depth of character these fine young musicians consistently display.” – Adam Kasper