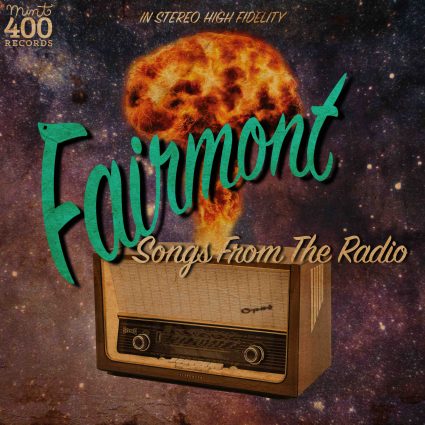 Fairmont - Songs From The Radio

“sounds like something that’d be in a Wes Anderson film… a consistent tone and feel. Nice job all around.” – Jim Teacher | The Multi-Purpose Solution

“Fairmont makes the kind of quasi-twee indie pop that I wish was being made in more basements across America. Wonderful instrumentation that runs the gamut from math-rock to electro-pop.” – WOUB-AM – Athens, Ohio

“Intelligent, well sung, well written and extremely tight musicianship. Not to mention the fact that it was produced well too.” – Johnny Demon | The Land of Nod WRPR FM 90.3

New Jersey indie music veterans Fairmont release a collection of 10 years worth of cover songs ranging from The Beach Boys & The Bee Gees to Nirvana & Tom Petty, what more could you ask for? This compilation features songs that have appeared on compilations and tribute albums over the last decade and the never before released “Talking In Your Sleep”, a cover of 80’s song by The Romantics. The band brings their quirky style to everything they touch. The compilation features newly remixed & remastered versions of “God Only Knows” originally by The Beach Boys, “Hidden Charms” originally by Link Wray, & “Serve The Servants” originally by Nirvana. As well the compilation features songs that were never available on streaming services or that appeared on out of print LP’s like Fairmont’s cover of The Postal Service’s “The District Sleeps Alone Tonight”.

Whether you are a fan or Fairmont or never heard of them, this compilation has covers that span 60 years of music and surely has something for everyone.