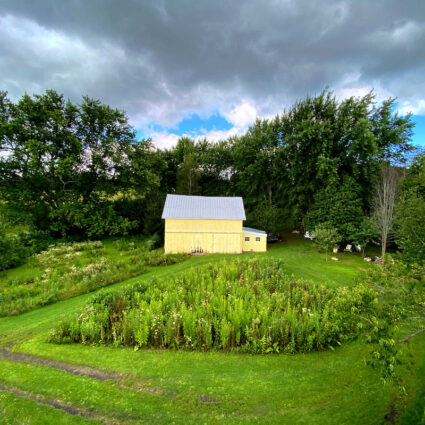 Super Natural, King Ropes’ 5th album, is both their most ambitious and most intimate work, expanding the parameters of the band’s desert rock and ragged Americana sound. It is buoyed by a directness that brings out songwriter and frontman Dave Hollier’s most stirring songwriting to date; writing about tragedy and pain with wry humor and conversational bluntness. Long-simmering family trauma, visions of animal reincarnation, mysterious respiratory ailments—all are worthy songwriting prompts as the record vacillates from the pounding rhythms of “Hello Sun” and thick, stoner-rock roar of “Drunk Donny” to the tenderness of “Sure,” a sorrowful, synth- driven ode to regret.

The music is organic and immediate, choosing raw musical chemistry over manicured digital gloss. Bracing, distorted drum sounds bring a touch of experimental bombast to the proceedings; some tracks, such as “Mystery” and “Drunk Donny,” with its droning moans of cello, push King Ropes’ music to harsh sonic extremes.

“The writing in these songs is more direct,” Hollier says. “I’m saying what I’m saying and not trying to get at something in a roundabout way.” Take the disarmingly plainspoken “Breathing,” which starts as the story of a mysterious breathing ailment, set to a twangy, understated groove, and progresses into a sprawling inventory of pain and suffering. It is a quietly stunning song, sculpted out of empathy and the wisdom that life is a series of battles we never saw ourselves fighting.

Super Natural skids to a close with “Mystery,” one of the strangest and most rousing entries in the King Ropes songbook to date. The song is all circuitous melody and lo-fi clatter, rising in intensity as Hollier breaks into an impassioned yelp to recount a cryptic joke involving an onion and a rutabaga. “It’s not a mystery / But it is,” the singer repeats in ramshackle harmony, a zen refrain soon swallowed up by a whirring, rhythmic roar during the record’s final moments. It is comforting and inscrutable all at once.

“I’m aware of the fact that stuff’s really clicking nicely for us and I’m just going with it,” Hollier says. “Just pushing myself a little harder than I sometimes do in terms of writing songs, because it feels like some good stuff is coming out and I don’t want to miss it.”