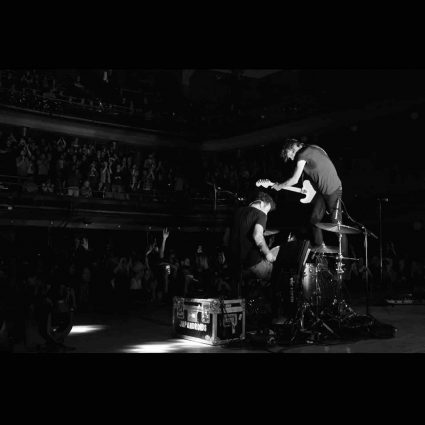 “Japandroids has become something of a unicorn in today’s landscape … a vibrant, self-sufficient guitar-led band that keeps growing its audience without making sacrifices, aesthetic or otherwise.” – The New York Times

“With guitars soaring and grooves accelerating, the words feel undeniable, and you know that when you hear ’em in a club – or theater, or arena – you’ll be bouncing off the walls, shouting every word.” – Rolling Stone

Vancouver duo Japandroids are announcing their first-ever live album today, reverently titled Massey Fucking Hall after the historic Toronto venue where it was recorded. To be released digitally on June 26 and vinyl later this fall on October 2, the 12 tracks include live versions of songs from all three of the band’s critically acclaimed studio albums.

“We’ve always loved playing that one live,” drummer David Prowse said of “Heart Sweats”. “It’s just got a great sense of momentum and never fails to get me hyped. During that tour we were playing it second or third in the set. It consistently feels like the moment in the set where I just get that sense of ‘oh yeah we’re cooking now,’ and everything just locks in and we’re ripping through the rest of the set. All the nerves are gone and it’s the moment where we’re just locked in and totally in the zone.”

Massey Hall is a celebrated Toronto venue that originally opened in 1894. With a capacity of nearly 3,000, the theater has hosted historic performances from fellow Canadian artists Oscar Peterson and The Tragically Hip. Landmark live albums by Neil Young and Rush were also recorded on its stage.

“We never thought we’d have the opportunity to play at Massey Hall,” Prowse explained. “It’s the most legendary venue in Canada by far, but it didn’t seem like a natural spot for a band like us to play. It’s a 100+ year old seated theatre, which isn’t the usual type of spot you expect to see Japandroids. Honestly, when we got off the stage that night, I remember feeling a sense of relief and exhilaration, but the whole thing felt like a bit of a blur. It was a very emotional show for me. We were both pretty nervous getting up on that stage.”

A band known for their kinetic live shows and rigorous international touring schedule, Japandroids hope releasing their first-ever live album during this global pandemic can be a healing balm for their fans.

“I really, really miss live shows,” Prowse admits. “I miss playing them and I miss being in the crowd. When you love music, there are few things more uplifting and cathartic than being in a room full of people at a live show. To not have that opportunity to experience live music together with a group of people has been hard to adjust to. It’s disorienting and it makes me sad to think about it. I hope that maybe in some small way people who are feeling similarly can find some solace in this record. They can hear the crowd and listen to us having the time of our lives at a historic venue and maybe that makes life a little easier for a minute, and reminds them that those moments will happen again down the road.”