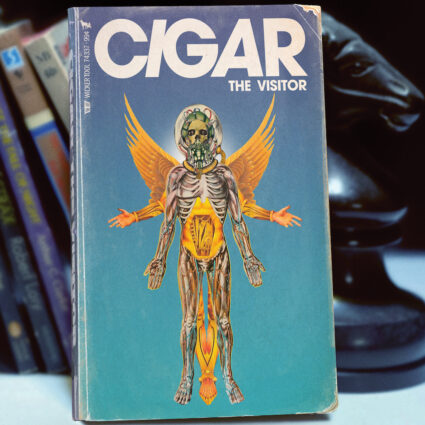 No need to front: You are completely forgiven if you are unaware of these Eugene, Oregon, skate-punk hellions. Starting in 1996, Cigar—vocalist/guitarist Rami Krayem, drummer Jon Sortland and then-bassist Jason Torbert—could’ve been a major contender in 21st century punk. Pennywise’s Fletcher Dragge was taken by the trio’s love of melody and straight-up acceleration, which led to the band aligning themselves with SoCal label Theologian Records for their Dragge-produced debut album, 1999’s Speed Is Relative. For the next six years, Cigar (who were named after the winning racehorse in the 1995 Breeders Cup Classic) lived the punk life by relocating to San Diego, appearing on some skate-punk compilations and videos while waiting for their lane to open. And during that time, the members’ lives began to change, from creating families to exploring other musical interests.

But here in 2022, with Sortland having acquired a playing resume that includes the Shins, Broken Bells and EV Kain, and Jonathan Hischke assuming the bass slot, Cigar were ready for re-ignition, writing songs and playing gigs in Europe before the pandemic hit.

“It wasn’t that I ever got tired of doing Cigar,” Sortland reflects. “I just don’t think that all three of us had a unified vision. We weren’t all going the same direction. When we came back to it more recently, we realized that it was just too much commitment to do this next level. And then Jason realized he just wasn’t capable of committing on the level that Rami and I could. Once he stepped down and we brought in Hischke, a lot fell into place. It turned out that Rami and I were willing to do a lot more than we were doing before. So I feel like we’re more unified now because we all have the same trajectory and vision for it.”

The 10 tracks on The Visitor easily shatter preconceived notions of young listeners and long-in-the-tooth poonks, alike. The album’s opening salvo, “These Chances,” fires right out of the gate with Krayem’s strident vocal and Sortland’s amphetamine drumming powering the proceedings. Headbangers can find joy in the brisk riffing of “In Armor” and “Move On.” The duo are also quick to acknowledge the contributions of Hishke, who plays in EV Kain with Sortland and had a stint in post-everything math-rock masters Hella. (“He’s a prog nerd who’s really bringing in some gnarly stuff,” Sortland enthuses. “He honors and respects the style that Jason set up for us originally while embellishing and making it more his own.”) The Visitor doesn’t let up on velocity or honesty: No detours in the form of four-minute acoustic love songs, trite hip-hop beats or other sonic concessions. Cigar are skate-punk personified, with a well-tuned engine and the knowledge that in punk, only you determine your glory days.  (continue reading full bio on DISCO)