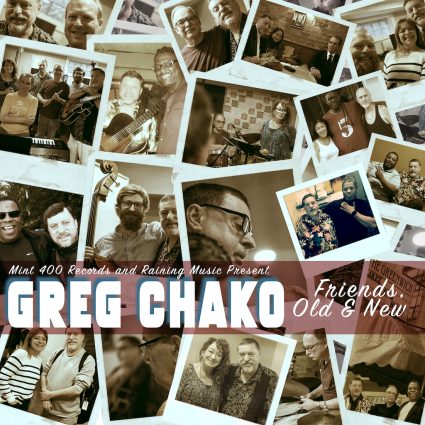 “Greg Chako suffered through an unfortunate recording hiatus of over 8 years, caused by a combination of personal circumstances and the outset of COVID in 2020, only to rise up in 2022 like a ‘phoenix from the ashes’ to record his 11th album as a leader titled, Friends, Old & New.

Chako signed to Mint 400 Records and Raining Music in 2022, and they are reissuing some of his older catalogue with new packaging, and spearheading his brand new recordings beginning with this one, the first of 3 due to be released by next summer (2023).

Therefore, Friends, Old & New promises to mark an impressive relaunch, if not an actual surpassing, of the prolific recording career that produced 9 albums in just a little over 10 years when Chako lived in the Far East.

It features an all-original set of 10 songs, ranging in style from a bluesy and traditional Guitar/Organ/Drums Trio, to a Brazilian-Flavored Sextet featuring percussion and both a male and female vocalist. Chako penned all the lyrics too, which are as supremely lyrical as his guitar playing.

There are 9 players present on the record, but the format alternates with trio, quartet, quintet, and sextet. Saxman Brooks Giles doubles on Tenor and Soprano; Vocal songs are interspersed with the instrumentals (in the style of Cannonball Adderley presents Nancy Wilson); Organ & Bass share roles throughout, except on the tour-de-force final track, Samba Summer, on which they both play.

“This album is comprised of all Chako original material, which feature rhythmic punches that perfectly compliment Chako’s solid improvised lines, tight vocal harmonies, and very catchy melodies. His compositions are an excellent example of combining the traditional with fresh and unique forward-thinking music. Chako is a fine player with a voice that should be heard by a much larger listening audience.” Professor Vince Lewis for Just Jazz Guitar

“A jazz mosaic painted with the very best of culture, ethnic, and musical sensibilities. That striking combination provides a sumptuousness and extensiveness that is rarely found in any genre.” Keith “MuzikMan” Hannaleck of Jazz Reviews