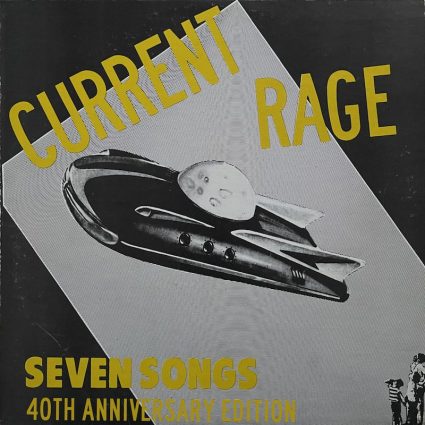 To celebrate the 40th Anniversary of an out-of-print forgotten classic, Propeller Sound Recordings is set to release a remastered and expanded edition of Current Rage’s sole release, Seven Songs. Fully immersed in the do-it-yourself aesthetic of the early-R.E.M. era, Current Rage’s indie record is highly regarded by record collectors seeking early eighties D.I.Y. releases. The relative scarcity of the original EP suggests the item does not circulate on the marketplace very often, making it ripe for reissue and reintroducing the band to a new breed of fans with this remastered and expanded version.

Anthony DeCurtis of Rolling Stone wrote, “an enviable and impressive explosion of new music was emerging from the Atlanta/Athens area at this time.” Current Rage was a part of that scene, drawing inspiration from Talking Heads, Pylon, and R.E.M. while creating a vision all their own.

Current Rage are a four-piece, post-punk, musical group that played live in the Southeastern United States during the early eighties. They were comprised of Chris Bewley, John Moore, Pat Kirkland, and Paul Lenz. In the landscape of a fertile, burgeoning Athens/Atlanta music scene Current Rage gained notoriety and a loyal following performing with such musical icons as REM, Pylon, Swimming Pool Q’s, The Fleshtone’s, The Bush Tetras, and The Bongos. Eventually Current Rage would headline shows on their own at such iconic venues as Athens, GA’s 40 Watt Club, Atlanta’s 688 Club, Chapel Hills’s The Cat’s Cradle, Birmingham’s The Nik, and Nashville’s Frankensteins.

Current Rage first formed in 1979 when skaters, Chris Bewley and John Moore, began writing songs together after school on a pair of second-hand guitars. The two first met as early teen-agers having been recruited separately by Mike Maloof, founder, and manager of Atlanta-based Progressive Skate shop. Bewley and Moore traveled the Southeast competing and marketing Maloof’s “Equalizer” skateboard decks and “Accelerator” wheels. Eventually, Moore was recruited by the Z-East team, in Jacksonville, Florida to ride professionally for their Z-Flex brand of decks and wheels. While Bewley was recruited by Sabre Skateboards out of northern Alabama to represent their laminated skate decks at competitions and demos. (continue reading full bio on DISCO)