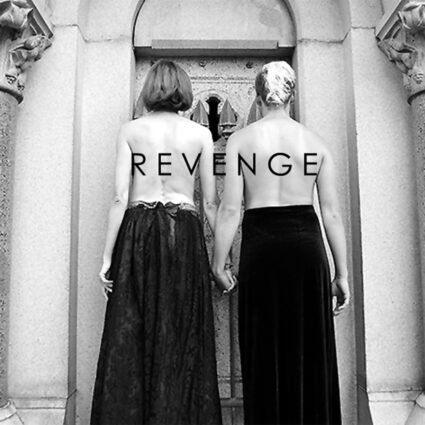 ‘As such, the sound of “Revenge” is sparse and haunting, with an infectious, slow-pulse percussive underpinning that propels the flow from song to song in a connective fashion. In addition to Freitas’s acoustic guitar floorplans — he was seduced by the chord structures of a lot of the gospel material — there are splashes of moody piano runs, keyboard atmospherics and riverine bass guitar figures. All of this works beautifully behind the vocal delivery. Freitas, who’s also a poet (and who adopted the name Ellery Twining from a character in a novel he’s writing), relies on a dry, hypnotic spoken-word delivery punctuated by timely moments where he’ll sing a refrain or phrase to great effect. It’s not remotely hip hop but more a style that calls to mind work by artists like Lou Reed, Jim Morrison and Tom Waits. In fact, Freitas says, he was most inspired by Neil Tennant of the Pet Shop Boys, Laurie Anderson and, quite specifically, the phrasing and intonation of Neil Young in the song “Tired Eyes” from the classic “Tonight’s the Night” album. “I knew I couldn’t carry a record by singing — I don’t have the voice — but I knew I could synchronize the poetry and use the syntax and rhythm of spoken word to get the songs across and sing just enough to give it a bit of emphasis,” Freitas says. “And it’s a great credit to Eric that he helped me get this done the way I imagined and hoped.”‘ – The New London Day

“A simple yet charming guitar melody begins this story, which is then set to motion by the following line: “I read my first self-help book in the third grade…” That’s the beginning of “Revenge”, an album full of personal thoughts put together by Ellery Twining.” – Less Than 1000 Followers