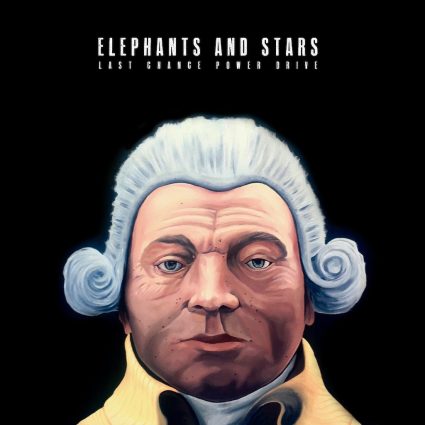 Elephants and Stars are a rock ‘n’ roll Canadian five piece outfit with a real twist. Taking on the reinforcement of bringing the ever resurgent rock scene back to its hay day, the band, fronted by songwriter, vocalist and guitarist Manfred Sittmann, have something extra to offer in their modern and refined sound.

Since bursting onto the scene in peak 2020, the quintet have been taking their homeland by storm, being spun on national radio and single ‘Ceasefire’ blowing up on Spotify with over 100K streams.

They now arrive with their new brilliantly titled 6-track EP ‘Last Chance Power Drive‘. Produced by Ian Blurton, he immediately jumped on working with them and specifically the thundering lead single ‘On The Table’. This track holds so much of what the rock ‘n’ roll lovers crave, a four chord guitar loop and a riff that is as infectious as it is commanding. There’s a real turn on the nostalgia in this one, taking note of legendary band Foo Fighters with Sittmann’s high vocals and harmonies, alongside the band’s tight-knit performance.

It’s brought back to the modern day so subtly though, with some high end synths that resolve themselves at the end of the chorus, making for an even more compelling listen. The rock and punk further ensure, with something that we all know that we miss in the break, a short but very sweet guitar solo. Elephants and Stars have nailed their sound, and it’s one that will surely carry through all of the age and linger long after its end.

Sitting somewhere between Foo Fighters and Jimmy Eat World, Elephants And Stars possess a compelling likability within their music, an effortless warmth and relatability at a time when guitar bands are thriving once again. Having already built a mass fan base, picked up national radio play on Planet Rock and 94.9 The Rock and featured in the likes of Clash, Punk News, Exclaim and The Punk Site, the band are back to their best once again on the new album

Speaking about the album, Manfred adds: “The record itself is a document to all of our influences and favourite artists. I think when you are younger you want to appear ‘authentic’ so you try and hide your influences whereas when you’re a little more experienced you realize that we’re all standing on the shoulders of giants.

This record was us basically paying open tribute to those obvious influences. In fact, one of the band’s long-standing influences – Florida’s Against Me! – seemingly heard it as well as Laura Jane Grace added the track On The Table to her personal playlist sent out to their fans.

From the Cure-meets-Jimmy Eat World sound of Are The Stars Really Dead? to the cover of the AM Gold classic “I’d Really Love to See You Tonight” to the title of the record itself, if you think you hear the influence of a certain band, you probably do.”

The new single On The Table and the new album Last Chance Power Drive are both out now.