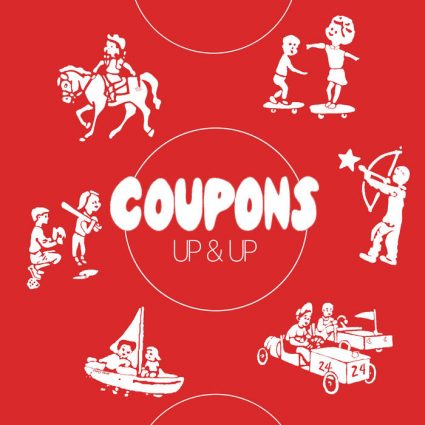 It’s been 4-years since indie-rock band Coupons released an album, and they’re set to drop their sophomore record, Up & Up, just next month. Lead single, “Moz Disco” definitely leads with a hazy indie-rock tone that only warms the longer it plays. It acts like a sunny-side-up to the band’s discography. Reminding me fully of days where I rode top-down with the sun’s rays baking my car, its golden musicality and airy vocals just bubble with fun. If they were aiming for a perfect soundtrack to the waning of summer, they hit it out of the park. – The Alternative

Up & Up, the sophomore LP from Albany’s Coupons, was always a long time coming and a far time off. The band themselves created it under the impression that either time or they may forget it before it was finished. Over four years, the members of Coupons endured a lot of change — working through med school, cross-country moves, and false starts in the workplace — while writing an album that echoes the haphazard, accidental rhythm of adulthood. According to Coupons, “this is a creative renaissance for people you’ve never heard of,” a fact that’s immediately subject to change.

You’d never know this record was born from a challenge members Dan Lafave, Collin Reynolds, and Dan Maddalone posed to one another: write a song, present it to the group to be tracked over an 18-month songwriting period. At the end, fourteen songs that sound undeniably like Coupons but undoubtedly unlike each other were made. There’s even a bonus track. Up & Up defines the band’s sound as every side of the pop-rock coin, from the soloing lightning bolt “Moz Disco” to the woozy synth jam “Hard Candy.” There’s timeliness at play, like the anxious, cagey guitar breakdown unfurling after the yearning exposed on “I Wanted,” as well as timelessness. “Don’t Let Me,” like so many ageless and tender moments on the LP, gets boosted by upright piano and downright palpable sensitivity. Other selections, like “Ansel” and its swaying meditation on loss, find Coupons at their most base and component parts: a project born of survival and starting fresh amid impossible realities.