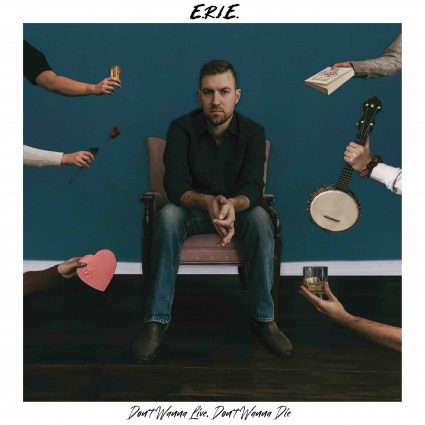 “…musically cheery, and lyrically chilling at times, with an authenticity and honesty that Foster developed early on in his life…” – Daily Gazette

“E.R.I.E. have perfectly summed up today’s modern mix of stress, pressure and anxiety, whilst adding in the one thing that keeps us human: a vital and unchanging sense of hope…” – The Rodeo

“E.R.I.E. encompasses what a mature but fiery rock sound should be. Tasteful touches of a Springsteen style with solid tone and life…” – Pete’s Rock News and Views

Upon listening, it’s not hard to hear that sense of lightness and clarity Foster was striving for. The record exudes a sense of urgency that has drawn comparisons to the likes of Frank Turner and The Gaslight Anthem, while also embodying an intimacy one would expect from Death Cab For Cutie or Frightened Rabbit.

The project was born out of a tumultuous experience which resulted in an unexpected three-day stint at the hospital. Late one night, after Foster’s heart stopped for 15 seconds on his bathroom floor, he found himself on a hospital bed preparing for emergency surgery. Fighting existential introspection and difficult questions helped lay the foundation for a new project called E.R.I.E., a mnemonic representation of his daughter’s names.

Don’t Wanna Live, Don’t Wanna Die was written and recorded at home by Foster (ex-The Cast Before the Break, Accents Deep Elm Records) and mastered by Grammy-nominated engineer, Mike Kalajian (Circa Survive, A Day to Remember, All Time Low, The Dear Hunter). In order to fulfill the live lineup, Matt Delgado and Chad Flewwelling were recruited on guitar and drums respectively, as was longtime collaborator Jordan Stewart on bass.