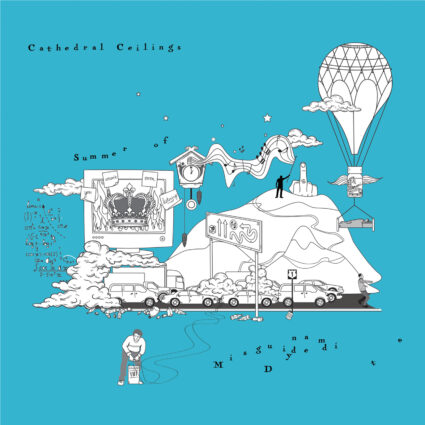 “Cathedral Ceilings come out of the gate full bore and pound the listener with churning, head-bopping, unabashed fury, guitars ablaze and drums throttling for all they’re worth:’ –Jim Testa, Punk Rock Scounting Report

Cathedral Ceilings is in the moment. Songs, like fireworks, blast off, dazzle, and shimmer into the next eruption. The band began in fits and starts (or was it fizz and suds?) with Ralphie and Nicky occasionally wandering into a practice space together. Songs were half witten, then wholly forgotten. Beers consumed and discarded. But by the end of 2018, Tommy was roped into the mix, and suddenly, They’re A Band!

From that initial big band arrived the two lathe-cut singles Thanks for the Guitar, Mommy and I’m A Band! By the time they were released, the band had amassed a rockpile of ragers – the ones you’re now hearing.

Drop the needle, load the disc, tap the screen and blast the feel-good explosion of the summer.