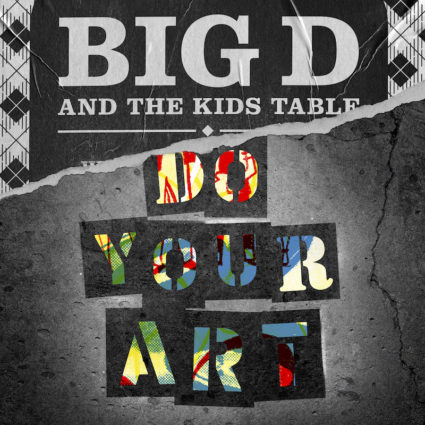 Big D and the Kids Table - Do Your Art

DO YOUR ART was produced by Reel Big Fish’s Matt Appleton. CONSEQUENCE vowed the lead single “Too Much” is “Stomping guitars, playful percussion, and of course a party of punchy horns.” Brooklyn Vegan pledged the second single “New Day” is “warm, upbeat music that feels like classic Big D but sounds fresh next to the new generation of ska bands too.” Ska Punk Daily declared, “A blast of fun energy!” The Punk Site added, “Do Your Art is ska-punk without borders.” ReadJunk proclaimed, “Do Your Art is crazy, skankable, moshable, ultra-hyper, reggaelicious and just a damn good album.”

Big D and the Kids Table formed during October 1996 in Boston, MA when its members converged in college. They have had major sales success which propelled them to touring throughout 25 countries supporting bands such as The Mighty Mighty BossToneS, Rancid, Dropkick Murphys, Less Than Jake, Goldfinger, Reel Big Fish, Streetlight Manifesto, Suicide Machines, and many others from the ska-punk and punk rock scenes. Festival appearances include Riot Fest, The Fest, Vans Warped Tour, Cranking & Skanking, Amnesia Rockfest, Reading and Leeds Festivals, Holidays in the Sun Festival, Boomtown, Hits & Pits Festival, and Deconstruction Tour. They have appeared on twenty compilations between 1996 and 2013 as well. In addition, the band hosts an annual Halloween show called A Nightmare Before Halloween that sells out every single year.