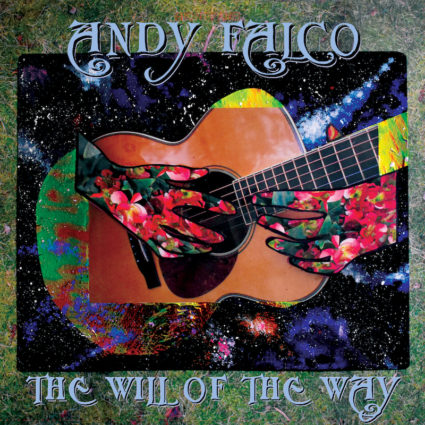 Andy Falco - The Will Of The Way

“Music was always a big part of our household growing up,” shares Andy Falco ahead of his forthcoming album The Will of the Way. “We were always encouraged as children to play musical instruments in school. Playing guitar started at home through the influence of my big brother Tom.”

Andy Falco is a guitarist, singer, songwriter and producer, and one-fifth of the GRAMMY award-winning bluegrass quintet, The Infamous Stringdusters. As a kid, Andy’s brother was the primary influence and inspiration to play guitar and jam.

And in a household where listening to the likes of the Beatles, Grateful Dead and the Allman Brothers, it’s certainly no surprise that the direction his own music took very much fell into the world of the blues, Americana and ultimately bluegrass.

Falco, as his fans and bandmates have come to call him, spent his formative years playing music on his home turf of Long Island and in New York City, where the music scene of the 90s was defined by small clubs, all of which curated a vibrant musical environment.

“Generally speaking, I played everywhere and anywhere I could, shared Falco. “I’ve been in so many bands over the years across many sub-genres of Americana music – Rock, Blues, Soul, Bluegrass, Folk… and eventually I landed with the Infamous Stringdusters.”

Having been friends with some of the [Dusters] guys from the northeast, it was 2007 in Nashville, after having relocated to tour and record with several artists as a side musician, when he and the Stringdusters officially joined forces.

Since 2007 and after Falco joined the band, he and the Stringdusters went on to record 9 studio records, one of which, 2017’s Laws of Gravity, went on to win a GRAMMY for Best Bluegrass Album.

As a songwriter, Andy’s approach is simple. “I simply sit and observe what I see in the world around me, and try to put it to music. Especially lately, I’ve gravitated towards certain observations that I hope others might relate to as well.”

Andy’s forthcoming album, The Will of the Way, stems from a number of songs that he’s had for a while, but much of it was written during what he refers to as “the great pause” of 2020.

“Being grounded from the road due to the pandemic, I’ve uncovered time to truly dive into songwriting in a way I never had before,” shared Falco. “It was a very emotional time (for me), and it led me to ask myself a lot of questions internally like ‘why am I writing this song,’ what am I really trying to say?’ I became only interested in recording songs that I felt a deep personal connection to, and the result was this album.

The Will of the Way is Andy’s first solo album to be released in 15 years. It features musicians from Long Island including his brother Patrick (on bass) and others from the local scene including Jon Preddice and Chris Marshak. The album also features a great Massachusetts-based singer, Erica Leigh, as well as Dave Butler (Guster), Damian Calcagne, Cody Kilby (The Travelin’ McCourys), Joe Russo on drums on a few songs, and Joss Stone on #5.

Andy lives in Suffolk County, Long Island, New York where he produces, engineers and mixes albums in his studio between tours. The Will of the Way is due out July 9, 2021 on Americana Vibes.