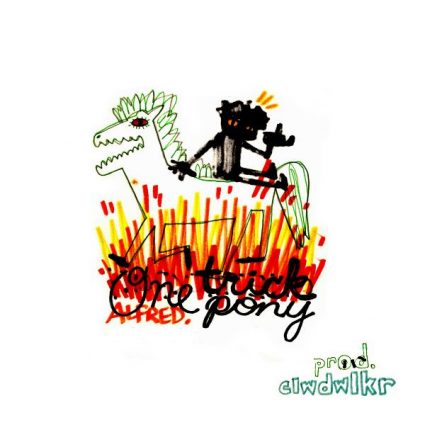 While frustration is inherent to Alfred.’s life and creative output, they’re careful not to make it the sole focus of their work. Rather than play into others’ expectations, Alfred. (they/them) opts for imaginative self-storytelling and twisted streams of wordplay consciousness, set to longtime collaborator clwdwlkr’s immaculately produced beats and wavescapes. On One Trick Pony, Alfred. covers a striking breadth of styles across a mere six songs, dancing between dark gospel, Dilla-inflected sampling, and hypnotic bops.

As Alfred.’s unpredictable cadences interlock with clwdwlkr’s widespectrum production, it’s hard to believe that they penned every verse before hearing a single beat. But Alfred. and clwdwlkr’s history traces back to high school, ensuring a mutual creative trust that gives context to Alfred.’s words, where their diaristic meditations snap easily, with intention, into clwdwlkr’s sonic tableau. To find a sense of order in the doubt-riddled journey of a project, Alfred. first commits to paper what they themself need to hear before introducing their verses to music, establishing the lyrical message as the backbone of each and every track.

It’s hard to allow yourself to feel strongly in a culture defined by detachment, cynicism, and irony, where sincerity and lofty goals are perceived as corny, but Alfred. aspires to thrive and provide community through the expression of sharing words, to breathe vivid life into their place in the world. One Trick Pony is a testament to the powerful clarity of Alfred.’s self-expression, whose light and intention are brought forth by their music, amidst the chaos.