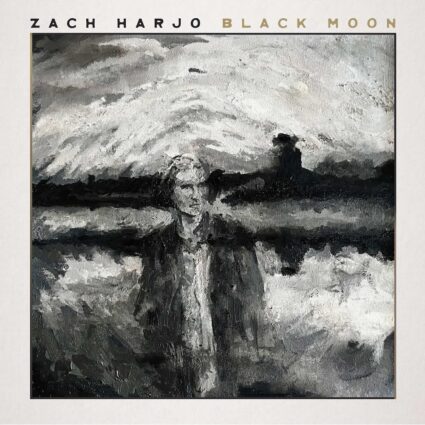 “a lush take on Americana, indie rock, and folk” – Surviving The Golden Age

Seattle based songwriter, painter, and sculptor Zach Harjo weaves indie-rock, folk, and Americana into a rich tapestry of hook laden melodies, deep grooves, and soulful harmonies on his debut album Black Moon. In bringing a Fine Arts background to both his songwriting and approach to recording, Harjo imbues his work with concepts more typical of the visual artist while maintaining the musical standards of a classic songwriter. Black Moon evokes a cinematic world in which Harjo sets vignette-like, interlocking stories through contrasting textures, negative space and mass, imagery, tonal contrast, archetypal, personal, and Homeric iconography.

A Beatles obsessive from a young age, it was Harjo’s great grandmother that told him he too could capture magic in melody. “She was a ragtime piano player and taught me a couple songs. She also played the trumpet, banjo and drums”, explains Harjo. “She proclaimed without any irony that she invented jazz.” From that point on, whenever Harjo looked at a set of strings and frets or a keyboard, he thought to himself “from somewhere inside of that puzzle you can invent an art form.” He has always held fast to the idea that an instrument is a laboratory for invention and experimentation.

So, Harjo wrote. From the casual confines of his Ballard home, to Silverlake dive bars, to European train cars, he wrote. “I think songwriters never stop writing” says Harjo. “It’s just always rattling around in the back of your thoughts”; perpetually digging about the musical scrapyard of the subconscious, tinkering with bits, writing scraps and pieces, and keeping them around to see if they can ever be useful or altered to suit a purpose somewhere, like a spare part for an obscure device. He wrote dozens of songs in search of the ones that became this record. Harjo tells “that process is how you uncover the figure in a block of marble, the way a reductive sculptor removes everything that the form inside isn’t.”

Soon Harjo had sewn together a concept record wherein themes of existential despair, loss, romantic and physical disaster, self-medication, and mortality are juxtaposed against sly beats and rich instrumentation, resulting in a dichotomy of tone and content. The tracks reference and expand into one another, unraveling motifs that evolve and loop back upon themselves, developing relationships, perspectives, and themes through repetition, narrative perspective, and the juxtaposition of lush sound against dark image. With lyrics that are at once metaphorical and literal, Harjo builds layers of meaning and subtext to be interpreted and recalibrated as the songs compound and reveal facets and nuance of the narrative arc.

Black Moon is a record that explores existential dread and the human condition, that processes loss through creation. It points at the ridiculousness of our self-importance, implicating humanity, while including itself in the critique. It is a fever dream that develops layers of connection and meaning between songs through repeated listening and unravels themes universal in their specificity. “Records that are important to me are like scripture” says Harjo. “Art can become either religion or myth. Myth can become either religion or art. I wanted Black Moon to be a meditation on a catastrophe, a window through which to contemplate the void and a parable of the fragility of existence. I consider Black Moon to be less a collection of songs and more as the scenes of a short film, my hope is that it can be seen as you listen.”