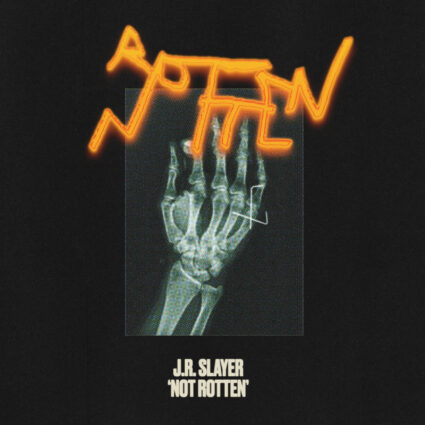 What started as a creative catch-all for Cody Votolato (Blood Brothers, Telekenesis, Head Wound City) has morphed into one of 2022’s breakout bands: J.R. SLAYER (pronounced jay-arr, not junior)

“I think the world is gonna die before I do,” Votolato sings on their new single and the title track to their debut EP, Not Rotten. “And if that’s true, I just want to spend the rest of my time right here, sitting next to you.”

Produced by Will Yip and out via his label Memory Music on September 9, Not Rotten captures the feeling of falling into earth-shattering love––the sort that safeguards its participants from the cruelty and cold of the world around them. It sounds as opposite as it can from Votolato’s past work; with melodic indie-punk singalongs, bubblegum-pop choruses, and soaring guitar riffs abound, Not Rotten finds the Seattle-born, LA-residing artist at a new place in his life.

“There’s so much bad shit in the world, there’s a lot of bad things happening. But when you fall in love with someone, you have this feeling that all that stuff can disappear momentarily,” Cody explains. “Everything goes away but you and this person, and your feelings about them and yourself.”

J.R. SLAYER comes years after Votolato’s pivot away from full-time music work, on the tail end of decades between bands including beloved Seattle post-hardcore outfit The Blood Brothers, Jaguar Love, Head Wound City, Telekinesis, and Cold Cave. Blood Brothers began when Votolato was 15, and at the time was his main and only source of income. “I got fairly burnt out trying to make money as a musician,” says Votolato. “I was struggling for a very long time to have music make me money and be my career. It turned into this very toxic relationship with music.”

He vowed to leave that life behind but continued to write and play music at his own pace after moving to Los Angeles in 2016. Soon, friend and collaborator Andrew Martin pushed him to solidify J.R. SLAYER, and then another friend booked a show for J.R. SLAYER at the Hi-Hat (RIP), and Votolato started performing again. “I really wanted to reconnect with music in the way that I did when I first started playing music, which was more about just needing it to survive in an artistic and soulful way, as opposed to needing it to survive financially.”

Jason Klein (Deaf Club), who plays bass on the record, introduced Votolato to Will Yip, who produced Not Rotten at his Studio 4 in Conshocken, Pennsylvania over two sessions, months apart, in 2021. Ben Walsh (Tigers Jaw) played drums on the record, and Votolato’s sister Brandi Jo Votolato sings alongside Cody on the record.