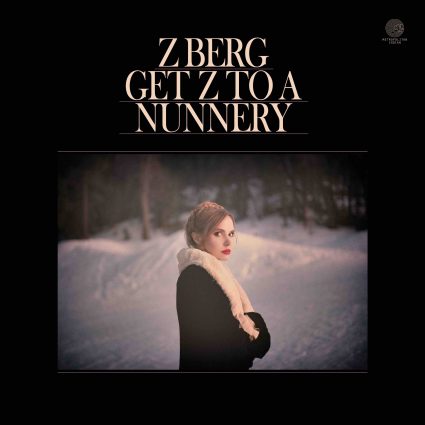 Z Berg - Get Z to a Nunnery

With the size and collapsibility of a child circus contortionist, Z Berg is a diminutive creature in reality, but with the added height of high heels and a crown of braids, along with the depth of her range, her history, and her despair, she casts a much larger shadow.

Her acid wit and preternatural talent fueled her first band, teenage girl-group, The Like, who made wistfully-dreamy new-wave and spiky mod-pop, anchored by Berg’s world-weary romanticism and fierce intelligence. They began at the tender age of fifteen and toured with everyone from The Strokes and The Arctic Monkeys to Phoenix, Dinosaur Jr., Muse, and Maroon 5.  They travelled the world like a feral street gang, leaving behind blood-stained bobby pins and a trail of reverb. The band would work with Wendy Melvoin (of Prince and the Revolution) and Mark Ronson before their untimely demise. This was followed by Phases, an exercise in pure pop exuberance formed with a group of dear friends including Alex Greenwald (of Phantom Planet) and Jason Boesel (of Rilo Kiley and Bright Eyes.)

Her upcoming solo record, Get Z To Z Nunnery, is yet another departure, a more raw and stripped down representation of Berg’s writing, allowing you to really see what it has always been.

She was assisted in recording by a cast of musical LA luminaries… Producer Ethan Gruska, a brilliant solo artist in his own right, haunts the record with his signature delicate piano playing and backwards Kaleidaloop ghosts. The string charts of Patrick Warren (Fiona Apple, Lana Del Rey, Bob Dylan, Tom Waits) essentially serve as the backing band. They are the kind of charts you might find from Henry Mancini or Andre Previn – the score to a movie that was never made. The inimitable guitar playing of Blake Mills sneaks in every now and again. The haunting harmonies of Phoebe Bridgers (on #5, 6, & 8) and Madison Cunningham are also featured, just to twist the knife a little bit more. And it all ends with a tragic, autobiographical Christmas duet with longtime musical collaborator Ryan Ross (Panic at the Disco, The Young Veins).

Every aspect of Berg’s world is an exercise in tearing down walls…the walls between artist and audience, the walls between fact and fiction, past and present…making everything she does feel like a fever dream…and perhaps sometimes like an insidiously-slowly-creeping fever-nightmare…

Get Z to a Nunnery is as much of a record as it is a mission statement.  It is the end of an era and the beginning of another.  It’s a collection of songs written over the course of chaotic years that always seemed like borrowed time. It is both small and uncontainable. With its wistful tragedy, its graceful unease, its listless love, and its resigned existential dread, it may just be the perfect music for the moment…the perfect soundtrack to the end of the world.