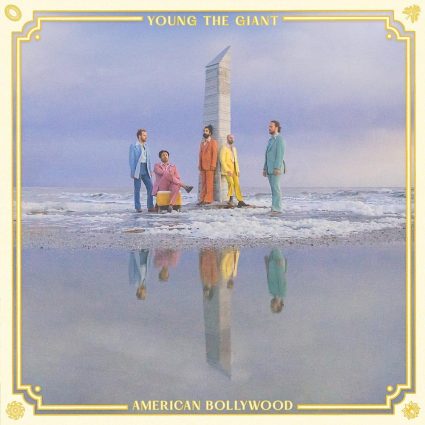 American Bollywood is the first album in four years since Mirror Master and the first since leaving the major label system. Since the last album, three of the band members became fathers, and of course there was a global pandemic. With lyrics mostly written by the band’s lead singer Sameer Gadhia, the son of Indian immigrants, the album tells the multi-generational saga of the American immigrant, and the origins, exiles, battles, and denouement of reclaiming their collective identity. “This is not just the story of an Indian-American caught in between two worlds,” the band’s Sameer Gadhia previously said, “it’s also our universal search to find meaning in chaos.”

Of Act IV: Denouement Gadhia says, “After the first three acts in American Bollywood: Origins, Exile, and Battle, we are in Denouement.

In the Indian mythology, the Mahabharata, the protagonists, the Pandavas, have defeated their cousins and reclaim their rightful place on the throne. In many other mythologies, this would be the logical ending point: a “happily ever after.” But the story continues into probably the most poignant act.

Victory’s celebration is short-lived: many of Pandavas’ friends, family, and loved ones, have died in battle, and although they are given back the kingdom, Pandavas grew disillusioned with the responsibility of power. Evil, it seems, is impossible to completely destroy. The brothers decide it is time to pass into heaven. They trek to the Himalayas and are tested until they finally ascend.

It is important to fight for what we believe in, yes. But what is the cost of our battle? Is it something we can truly live with? We have mounted banners on polarizing thought, having vilified the other side. If we destroy each other, what is left? Denouement is more about questions than answers. One thing is certain: each one of us is capable of both cruelty and benevolence.

The album was co-produced by John Hill (Santigold, M.I.A., Phantogram, Khalid) and the members of Young The Giant.”

In addition to the new music, Gadhia was recently named to Variety’s 2022 Inclusion Impact Report, the publication’s annual list highlighting advocates for inclusivity who’ve made an impact in the entertainment industry over the past year. In 2020, he launched Point of Origin on SIRIUSXM’s Alt Nation, a platform to amplify voices of color. Each month, he highlights an artist by playing their music on-air with heavy rotation, with each spin including a personalized introduction from Gadhia. Over the next year, Gadhia will expand this campaign as he continues to be a prominent, unwavering voice for equality and change.