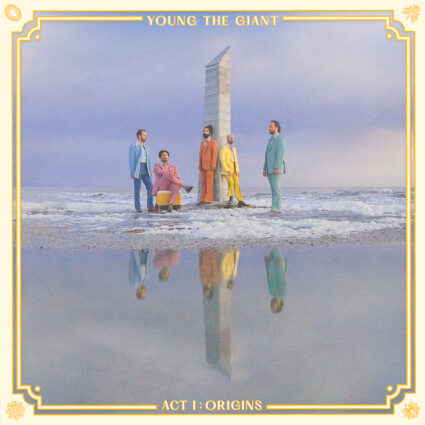 Critically-acclaimed and multi-platinum American rock band Young the Giant releases ACT I: ORIGINS, the first act of their forthcoming fifth studio album American Bollywood via AWAL/Jungle Youth Records – listen everywhere now. The entire album will be told in four acts, of which the remaining three are Exile, Battle, and Denouement.

In tandem with the release, the band also unveiled the short film for title track “American Bollywood”. Directed by award-winning, South Asian filmmaker Tanmay Chowdhary, it brings the song to life through an array of transcending, intersecting visuals – including personal archival footage from lead vocalist Sameer Gadhia and his family.

Of ACT I: ORIGINS and the genesis of American Bollywood, Gadhia shares:

“It’s been over four years since Mirror Master. Since then, three of us became fathers, a global pandemic made it impossible for us to see you on tour, and we left the major record label system by exiting a previously career-spanning contract. By 2020, we had written a whole album, but in the wake of so much change, we were not only forced to re-evaluate what we wanted to say with our music but who we were as humans.

100 songs into the writing process, I wrote what would become the title-track: American Bollywood. The chorus came to me in a dream: ‘I’m not a perfect man; I never claimed to be. This life’s so hard living, but loving you is so easy.’ It was a line I imagined my grandfather saying to his son, and my father saying to me. Their sacrifice is my privilege; my guilt—my origin story. Now, what will I tell my son? What sacrifices will I make for true love?

So, we erased the whiteboard and started to tell the multi-generational saga of the American immigrant, and the origins, exiles, battles, and denouement of reclaiming our collective identity. This is not just the story of an Indian-American caught in between two worlds; it’s also our universal search to find meaning in chaos.

This record was carved through worldwide turbulence, and the displacement of normality pushed us all to grow while supporting each other… We spent over two years curating sounds and field recordings, threading the influence of the South Asian diaspora on Western music throughout the decades, and have created a universe for this story to belong.

Lastly, this act structure also spans the story of this band over the last decade and our desire to redefine ourselves. This marks our first independent YTG release under our newly penned label, Jungle Youth Records, where we will proudly own both our music and identity. We are so excited to share…”

The album’s lead single “Wake Up” was released last month and offered the first glimpse into the band’s first new music since 2018. Gadhia described the song as the “prologue” to the full album:

“‘Wake Up’ is where this story begins: a fever dream from the poet Vyasa of past lives and visions, the journey of this band and all of our collective identity over the last four years.”

This fall, Young the Giant will take American Bollywood on the road with select marquee performances in famed major markets throughout October & November. Tickets and full details are available at www.youngthegiant.com.