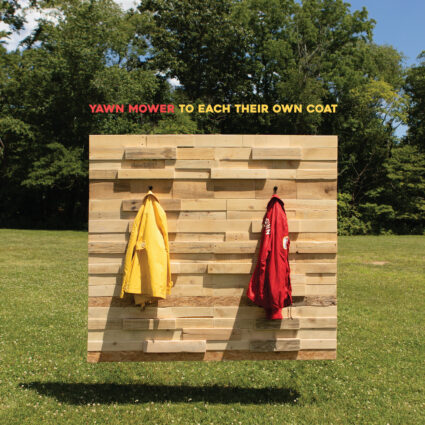 Yawn Mower - To Each Their Own Coat

“In one of this country’s finest small-town music scenes, Asbury Park NJ duo Yawn Mower have been winning over audiences since their inception with their infectious fuzz-rock stylings and irreverent sense of humor.” – Impose Magazine

“Somewhere in between The Front Bottoms and Pavement on the sonic spectrum, ‘Broken Filaments’ is trademark Yawn Mower. And yet, the single also sees the band expanding beyond the limitations being a duo can sometimes bring.” – The Rodeo: Song Premiere

Yawn Mower (YM) is a two-piece unit composed of Mike Chick and Biff Swenson. YM was born in Biff’s basement in Red Bank, NJ in 2015. “When are we gonna start a fuzzed-out garage band?” asked Biff. “How about tomorrow, I just got a baritone guitar”, said Mike. YM has since released several EPs and singles via Mint 400 Records. They’ve been to South by Southwest once. Biff’s favorite pasta is gnocchi, while Mike enjoys ditalini.

On September 30th,  2022, YM will release their first full length LP, To Each Their Own Coat, of which they have released three singles, “Sixteen Minutes”, “Broken Filaments” and “Elevation”.  These singles, and the album as a whole, showcase a bigger, broader sound than most are used to from YM.  The album pays homage to many of the bands that influenced the duo, some being Mike Krol, Broken Social Scene, mewithoutyou, Dogs on Acid and Death From Above 1979.  The LP is currently available on CD and will be available on vinyl as soon as they are pressed.

YM has expanded its live band for these new songs with help from Nick Gianatiempo & Dana Yurcisin of Grasser and Eric Friedman of Earth Telephone, as well as local Asbury Park singer/guitarist Pam Flores on backing vocals and Nicole Scorsone on violin. Neil Sabatino, CEO of Mint 400 Records says, “I’ll venture to say you have never heard Yawn Mower sound so full and lush.”