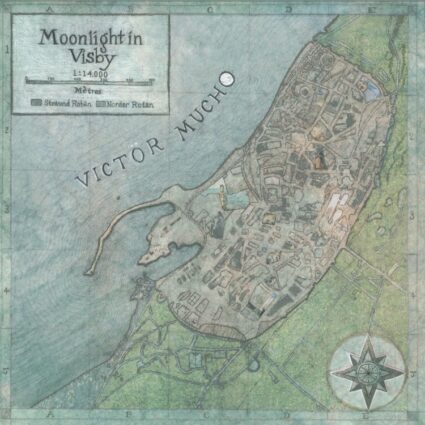 “Capturing the same fragile beauty and wounded catharsis as early Bon Iver.” — Under the Radar

“A felt performance that contends with the lush, expanding background of artists like Saintseneca or Bowerbirds.” — FLOOD Magazine

“Incorporates everything from synth lines to the Baltic Sea to create a textured landscape that is at times both vibrant and austere.” — Glide Magazine

Moonlight in Visby is Brian Macdonald’s (Judah & the Lion) debut album as Victor Mucho, written and recorded during his time living abroad in Sweden. Macdonald, his wife, and his dog Halyard bunkered down on the remote island of Gotland found in the Baltic Seas. Victor Mucho found himself in a secluded bubble. He was half a world away from the familiar big cities, and fashion and trends seemed non-existent. Marooned in the tiny, rural town of Visby, their new home sat atop a massive grey limestone rock, the last remnants of what was once a coral reef. They settled within the five-mile town, threaded with brick-lined streets and bordered by medieval defense walls from eight centuries ago. His daily walks uncovered the ancient lives of fossils among the smooth stone beaches; jaunts to the grocery store would be enveloped by Viking ruins. Every day served as a reminder of the tiny space the Macdonald’s occupied on a small island, surrounded by artifacts spanning over eons. They held a year of seclusion and silence with the ancient, bordered by the cold and stormy Baltic tides. With his wife spending her days in school, Victor Mucho learned to surf, chartering himself against the crashing sea and discovering his own frailty. The waves sculpted him like they had carved the limestone pillars of the Raukas backdropped behind him over a millennia ago.

Leaving his home in Tennessee proved difficult. Homesickness fogged his vision, wanting to return to the life he’d built. The tides pushed him into eerie loneliness on an island that spoke a different language. Then came the winter. The crashing waves that soundtracked his days crested, reaching near-freezing temperatures. Every so often, the winds faded and the waters stilled, and the island would sit stoically in the dark, crisp air. This 14 song album is shaped by that space. That feeling of vastness and isolation in a closed-in world. Every day was a study and acceptance of weakness, found in the waves and in one’s heart. Every day asked him whether he should wait for home or to wake and build a new one. Victor Mucho reckoned with love and identity, forged by the frigid Baltic Sea and quenched by fires on the beach. (continue reading full bio on download page)