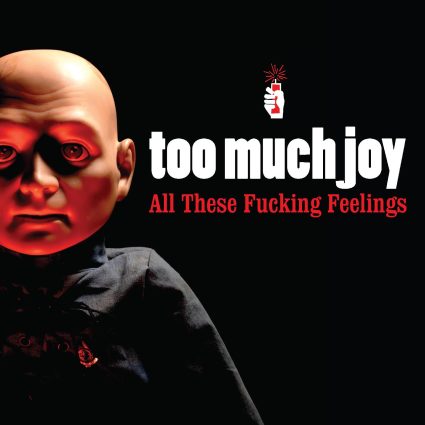 Too Much Joy - All These Fucking Feelings

After 2021’s Mistakes Were Made broke the band’s silence after 25 years of being away, Too Much Joy return with even more rebellious power-pop for smart people. Best known for early 90’s MTV minor hits “That’s a Lie” and “Crush Story”, the 5-piece is viciously smart and makes you laugh and think while simultaneously pumping your fists and stomping your feet to achieve the long-standing vision of “Randy Newman fronting the Clash”.

It’s rare for self knowledge to come with killer hooks, for maturity to feel nitro-combustible, for songs about feelings and hugs to rock the body as much as they seize the heart, for decades-later artistic comebacks to measure up to the music that made a beloved act matter in the first place.

“If I knew how to avoid these f*cking feelings / then I’d be a very different kind of man,” runs the first line of the title track of the second Too Much Joy album of this cursed millennium. Lucky for us the band isn’t made up of the kind of men who can manage that trick. Instead, on the triumphant All These Fucking Feelings—the band’s seventh full-length LP—Too Much Joy holds true to what it’s always done, in the 1980s, 1990s, and off and on in the years in-between, as its members worked real jobs and formed families and grew from punkish, prankish suburban dreamers to adults who have indisputably seen some sh*t.

Through it all, no matter what the world throws at them, Too Much Joy still mines the confusion, anxiety, rage, and joy that all of us feel. Then, through the messy process of band democracy, transmutes it into rock and roll of uncommon passion, power, and insight. (Continue reading bio on DISCO)