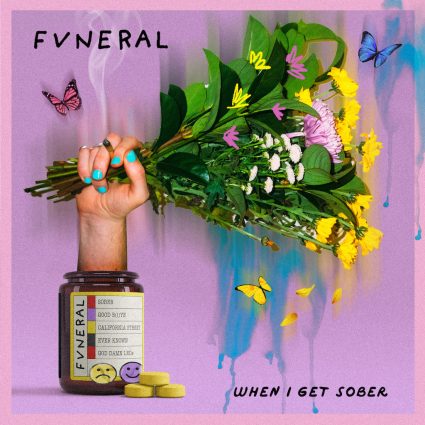 FVNERAL - When I Get Sober [EP]

With each song diving deep into vulnerabilities of the past, conducted faithfully by dual vocalists Tim Blunt and Ally Turner, FVNERAL’s debut EP flourishes with emotive prowess, catharsis and sincere storytelling. – Prelude Press

“The group has taken the plunge into being their own entity and are ready to introduce themselves to the music world.” – Ones To Watch (USA)

“FVNERAL have a way of lifting you higher and elevating your everything.” – ★★★★ Declan Byrne – triple j (AUS)

“I don’t know for sure if Australia’s FVNERAL are named after the Arcade Fire album, but they definitely make the kind of triumphant, widescreen indie rock that that band helped pioneer.” – Brooklyn Vegan (USA)

“With a wealth of talent at their disposal, it’s no surprise that ‘GOD DAMN LEDs’ arrives as a piece of music that feels both immensely accomplished and capable of going to toe-to-toe with international musical heavyweights.” – Rolling Stone (AUS)

‘WHEN I GET SOBER’ flaunts five tracks deftly decorated and laced with morality and intimacy, exposing the paradigm of human nature through iridescent indie music.

Members of FVNERAL have shared studio involvements with Australia favourites Birds of Tokyo and Stand Atlantic. They have also collaborated on creative projects with international powerhouses Frank Carter & The Rattlesnakes, The Struts and Neck Deep.