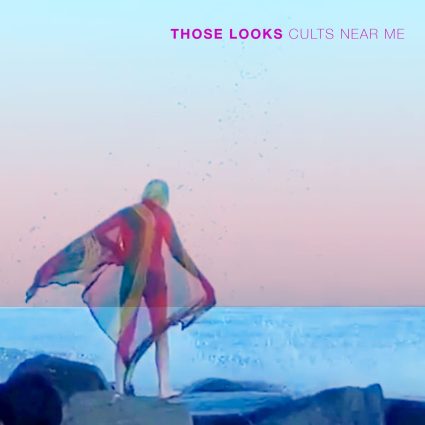 Those Looks - Cults Near Me

“sounds like a hit song written by a group like Fleetwood Mac and The Pretenders meet Soccer Mommy and Phoebe Bridgers. You know how some bands take a few records to figure out their sound and other bands come out right from the start with their own original sound that makes them hard to compare to any one band. This is that band.” – Blood Makes Noise

“Are you a believer now? If so, it’s time to get on the bus.” – The Big Takeover

Those Looks, an indie rock four-piece based out of Lambertville, New Jersey, will release their debut full-length album, Cults Near Me, with Mint 400 Records on November 11th, 2022. Following a self-released 2019 EP, which garnered local interest in their velvety brand of indie pop, band members Kelly Bolding (lead vocals, guitar), Sylvia Barrantes (lead guitar), Randall Newman (bass), and Shaun Ellis (drums) spent the pandemic steadily cultivating their powers. Cults Near Me was recorded and produced by Steven Xia (Camila Cabello, Boyish, Scotch Mist) in the band’s converted church practice space, where many of the songs were also imagined and written. The album’s ten songs represent an expanded sonic range that includes the surfy pop of the band’s early days, a grungier, 90s-influenced rock element, three-part harmonies, and just a touch of country. Their sound is one that fans of Angel Olsen, Sharon Van Etten, Julia Jacklin, Warpaint, Wet Leg, and Alvvays will likely appreciate.

The album-opener and first single, “Hymnal,” engages most directly with the cultish, exploring themes of idealism and influence over others. A pipe organ opens the song before handing the melody over to a dreamy, delay-laden guitar lead; the sultry vocals of the verse eventually open up into a soaring chorus, robed in harmonies, that is sure to stay in your head long after the song ends. Other highlights on the album range from the queer country ballad “Chelsea,” to the jilted power-chord swagger of “I’m Fine,” to the sexy, percusive escapism of “You Know Where.” Lyrically, the songs venture through personal meditations on relationships and communication failures, the anxiety of living through climate change, and even a retelling of the doomed romance of Beat Generation icons William Burroughs and Joan Vollmer.