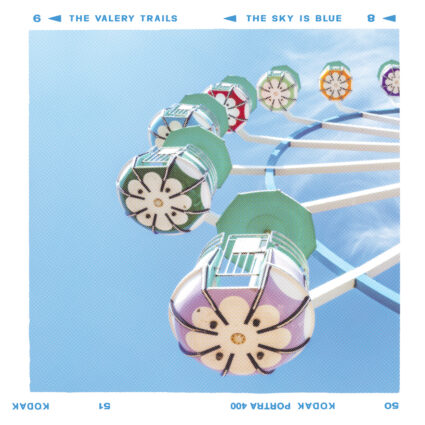 The Valery Trails - The Sky Is Blue

“Recalling the anthemic glory of fellow Brisbanites The Saints in their later, more melodic life, the track is dynamic and pulse quickening with a cool indie swagger and a joyful, indelible chorus.” – Backseat Mafia on ‘Jaisalmer’

“If you’re looking to make your road movie about wide-open spaces and foolish choices coming back to haunt you, [Ghosts and Gravity] just might be your soundtrack.” – PopMatters

“These guys aren’t trying to reinvent the wheel; they’re trying to do something even harder. They’re showing us what can happen when you mix a concrete respect for certain musical lineages with a brazen disregard for modern convention.” – Nooga.com

“It’s a mix of the best of 80/90s underground.” – Janglepophub on the Disappear EP

The Sky Is Blue is The Valery Trails’ most ambitious album to date, with the band working without a deadline and taking the time to produce each song to its logical conclusion without strictly adhering to a rigid sonic framework. Help was enlisted from Brisbane friends Tim Steward (Screamfeeder, We All Want To – guitars and vocals) and Skye Staniford (We All Want To – vocals) as well as online collaborations with a horn section in Atlanta, Georgia (Terminus Horns) and strings by Swedish musician Filip Magnusson.

The album was mixed in North Carolina by Scott Solter, who has recorded and mixed an eclectic array of artists including The Mountain Goats, Superchunk, St Vincent and his own avant garde / ambient projects such as Boxharp and The Balustrade Ensemble. Scott was the perfect choice to bring together the diverse elements and different ideas explored in this set of songs, honoring each song’s direction while bringing them all together as an album.

The maturity and poise of Andrew Bower’s songwriting provides the canvas for the band to layer sparkling guitars, fuzz-laden riffs, cascading melodies and a weighty and fluent rhythm section. There’s a muscularity to the music but one that’s equally tempered by sensitivity and, at various times, a dreamy sway or a surge of electricity.

The strength of the album lies in the way the band imbue the songs with their various international influences, seamlessly blending and embedding them in the songs. There’s the sound of Brisbane in the 70s and 80s, the textural shoegaze side of UK indie in the 90s, the literate jangle and fuzz of some of the New Zealand Flying Nun bands, the rhythm and drive of Melbourne’s Underground Lovers and the nuanced guitar sounds of US college rock.

Even as the band’s lives change and the world around them changes even more, The Valery Trails continue to strive towards their goal to build a body of work on their own terms.