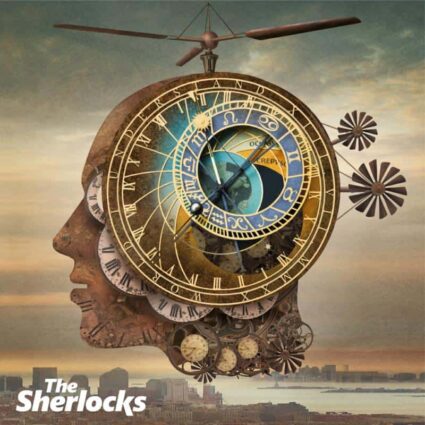 The Sherlocks - World I Understand

While the rest of the world was put on hold, The Sherlocks were undergoing a rebirth. Like every other band, their plans for 2020 were scuppered by coronavirus: in early March they completed an initial low-key UK tour to support their 2019 second album Under Your Sky, but planned tours of America and the far east were scrapped along with what was gearing up to be a triumphant summer of high-billing festival shows. But their woes were compounded when Josh and Andy Davidson, the guitar and bass-playing brothers with whom the Crooks had formed the band as teenage neighbours in 2010, declared that they wanted to leave the band after the scheduled dates. “They wanted to slip back into normal life,” Brandon explains. “It is a very weird job. It’s 24-seven and they’d spent 10 years with us going round in a van. They probably just couldn’t see themselves doing it for another 10 years or 20 years.”

Bolton On Dearne’s The Sherlocks were certainly a slow-burn overnight sensation. Ascending swiftly from stints in working men’s clubs to rammed, buzzing and riotous gigs on the nearby Sheffield scene, they were embraced as the city’s next big guitar stars – the next-gen Arctic Monkeys, if you will – and the band set to launch the next wave of Sheffield alt-rock. Which they did: a series of self-released singles and EPs, beginning in 2012 and really kicking into gear with their Arctics-style signature anthem ‘Live For The Moment’ in 2014, spread the word like wildfire.

Over two years of hard touring, The Sherlocks rose to two-thousand capacity venues across the north of England, caught the ear of Radio 1, 6 Music, Radio X and Soccer AM and signed to Infectious in October 2016. A smart signing; months before their 2017 debut album Live For The Moment hit Number Six in the UK they were already crowned as local heroes at the Sheffield Arena, supporting Kings Of Leon.

With Under Your Sky also hitting the Top Twenty, it was an upward momentum no amount of personal or pandemical pitfalls could thwart. “[Coronavirus] was a bit of a blessing in a way,” says Brandon, “because it’s given us time to get new people in, get up to speed and record a new album.” Guitarist Alex Proctor was a fretboard “wizard” suggested by their sound guy (“He used to be in a Sex Pistols tribute band for some years,” Brandon laughs), and bassist Trent Jackson met the band while doing backline at some of their festival dates.

After several months of rehearsal and WhatsApp training, The Sherlocks hit Rockfield reinvigorated, determined to “capture some of the energy we had on the first album” and bearing the best collection of tunes of their career so far.

Rich, mighty and mature, World I Understand is the The Sherlocks’ coming of age.